Gearing up for some severe weather in our area… I mean, like, really severe.  The midwest/southern US is seeing a rash of tornado outbreaks this season.  This is what today looks like: 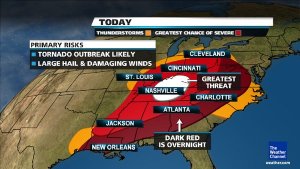 See that white spot there in the middle where it says “Greatest Threat?”  Oh yeah…that’s right about where I live.  At least we aren’t in the overnight area.  It may not be considered the greatest threat area, but nighttime tornadoes are more likely to cause casualties, because people are often caught unaware or unprepared.

Now, as I stated in a previous entry, I have a mild fascination with tornadoes.  But unless you’re a meteorologist, sometimes the ‘scientific explanations’ can get a little…verbose.  So this is the most helpful description of the process that I have seen:

In order to form a tornado, you need three very different types of air to come together in a particular way:

When a storm system high in the atmosphere moves east and begins to lift the layers, it begins to build severe thunderstorms that spawn tornadoes. As it lifts it removes the cap, setting the stage for explosive thunderstorms to develop as strong updrafts form. If the rising air encounters wind shear, it may cause the updraft to begin rotating, and a tornado is born.

This series of images that I found on National Oceanic and Atmospheric Administration government website is helpful in illustrating the formation of the funnel cloud.

We’ve already had a t-storm earlier this morning and right now the day is bright, although the sky is still full of clouds.   But the window of time today for worst threat of tornadoes is still ahead of us, between roughly 4 to 9pm.  I can hear the wind picking up.

I’m anxious, and am trying to plan for a safer place for my family and I to be than this single story building in which my apartment is located.  But I am also kind of excited and hoping to get a glimpse firsthand of one of nature’s most interesting weather phenomenon.  Fingers crossed for my own pictures…(oh, and that no one drops a house on me, of course.)