So, being a child of the 80’s (and a teen of the nineties,) I love me some 80’s movies.    And I can’t even remember when the “remake frenzy” started, but it seems like it’s been kicked into high gear these last few years or so.  I know I’m not alone in saying that, cheesy as some of our beloved 80’s movies were, we loved them, and most of the time the remakes are just bigger budget, higher tech flops.

For instance, the new The Thing movie, though having the same title as its namesake, it was billed as a ‘prequel’.  I would have to say that I unequivocally, 100% prefer the crappy animatronics of the eighties to the crappier CGI in this piece of shit film.  It was not scary.  There was none of the suspense in this new film, no build-up.  The creature unveiling in the new flick was…well, it was like the director blew his load all at once instead of some nice teasing and foreplay with the audience.

To expand upon this idea, basically,the remakes of our old favorites can’t revive the feeling that the old films evoked for many reasons.  The two major reasons are things that no amount of money or technology can match:

1) Our favorite actors played the characters.  They’re too old to be in the remakes, and to loosely quote some random person off the internet, “there’s no one that can say ‘nobody puts Baby in the corner‘ the way Patrick Swayze did.”

and 2) (and even more important) these old movies were our first experiences, during formative times in our lives.  You can never remake any movie and have it recapture the feelings the originals evoked in our young hearts.  For example, sorry, but just any bunch of jerkoffs in after-school detention does not, a breakfast club, make!

Moving on, this week I watched both the Footloose movies.  I was not really expecting to like the remade Footloose .  If I’m going to be completely honest -and I might as well in my own blog- for one thing, I didn’t like the look of the female lead, Julianne Hough.  Too “Jennifer Aniston-y”.  And I totally did bash her and her extra haughty portrayal of Ariel Moore throughout the whole film.  The original Ariel, while a bit uppity, was not nearly as in-your-face as the Hough version (which may be more a script issue, than the actress’ actual interpretation.  I can’t say for sure.)

As to the script, I have to say, that the Footloose remake script was almost word-for-word the same as the original movie in most of the character interaction.  They changed a few fundamental details in the new version, it seemed to me, for the purpose of deepening the dramatic feel and inner turmoil of the characters.  For instance, in the original, Ren’s mother moved with him to Bomont after his father left them.  In the remake, Ren’s mother has been written out, having died of leukemia.  This adds to Ren’s feelings of needing to do something in Bomont to make a change, since there was nothing he could do to change the course of his mother’s illness.  This is not something I’m guessing at; he said as much in one of the more dramatic exchanges in the remake.

Small things have been changed to modernize the film, the game of ‘tractor chicken’ played between Chuck and Ren essentially as a male posturing (read: dick measuring contest) over Ariel has been morphed into a race and chicken game between four painted and decked out school buses.  Chuck is essentially the same asshole, although in the remake, the extent of his douchbaggery is obvious a lot earlier in the film, as he basically manipulates Ariel into giving up her virginity.

Similarly, the details surrounding the accident that catalyzed the whole uber-pious attitude of the town and got the anti-dancing laws passed have been tweeked as well.

The dancing has been modernized in the remake in many of the scenes, especially the scene involving Ariel being caught dancing at the diner by her father, Reverend Moore.  However there are many nods to the original.  One that I found especially endearing was the fact that the remade Ariel’s dress and hairstyle for the prom at the end of the film are almost exactly the same as the original.  Also, they used the same songs throughout both movies, albeit, in the remake, many (but not all) of the songs were also newer “remade” versions, by newer artists.  Even the car Ren drove, an old yellow VW Beetle, was the same in both films.

The Rev. Moore character in the original film (played by John Lithgow) is much more ‘fire-and-brimstone’ than the Dennis Quaid version, as is the character of Roger. (In the original version, Roger is practically the Mormon version of Chicken Little, ie: “the sky is falling because Slaughterhouse Five is being taught in English class!”)  (No offense to any Mormons.)

The fact that one of the boys in the fateful accident is the Rev. Daddy’s son and Ariel’s brother is not revealed until the middle of the original film, whereas they lay it all out in the opening of the remake.  Again, I’m assuming this is to heighten the audience’s sense of drama and empathy for the characters and make their over-the-top behavior seem more justified.

All in all, I found that I liked both versions of Willard, although in this instance I think Miles Teller actually out-performed Sean Penn (unbelievable, I know.)  The two Willards even look similar in many ways. I also found both versions of Vi Moore very likable.  I already have an affinity for Dianne Weist due to my affection for The Lost Boys, and although I have no rational basis for this opinion, I find Andie MacDowell also extremely likable.  She is pretty and classy, yet unassuming.

The one character that was vastly different was Ren’s “Unky” Wes.  In the original he was kind of stodgy and prim, whereas the Ray McKinnon version had real ‘scrote’ and actually stood up for Ren on numerous occasions.

Finally, not only would I be remiss in my duties as an 80’s movie buff if I didn’t mention Kevin Bacon, but also I would be a jerk because the title of this article would be very misleading.  Kenny Wormald did a phenomenal job in his portrayal of the brash young Ren MacCormack, but…well, he’s not Kevin Bacon.  What else can I say?  If you grew up loving John Hughes movies, and wearing wave bangs, scrunch socks, and snap bracelets, than you probably just “get it.”  If you didn’t, then maybe you don’t.  Just think of your favorite movie growing up and try to imagine it being remade, and a bunch of ‘new kids’ have replaced all your favorite actors…  Chances are, the film will have automatically lost some of it’s magic. 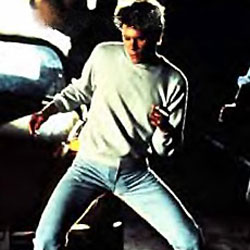 I will say this for the 2011 Footloose; it is one of the best, most true-to-the-original remake I have ever seen, and I really enjoyed it a lot more than I would have guessed.  The people involved in this remake did not feel the need to modernize everything about the film, and the fact that they adhered so closely to the original script is, in my opinion, the thing that makes this movie most successful.