Seriously…I think I just peed a little. The first trailer I saw for Resident Evil 6 (due to release in October of 2012) was not all that impressive.  But the newest trailer released yesterday during Capcom’s “Captivate” event really tickles my horror bone (that’s like a funny bone, only not in your arm.) I mean, there are two things right off the top of my head that have me practically frothing at the mouth for the release date.

First of all, Wesker Jr???  Hell yeah!  He’s like a CGI Luke Goss.  I’m thinking of downloading the trailer later for Spank Bank material.  His bad-ass attitude only fans the flames of my nether regions.

But seriously, I am curious to see what will happen with this character.  Is he the jerk with a heart of gold, or will he follow in Daddy’s footsteps and try to burn the world down?

The second thing about this trailer that really makes my monster loving neurons fire overtime are the scenes in the trailer depicting the J’avo, a new version of the regenerating zombie.  The creature appears to be covered in a sticky membranous material and looks to be mutating and emerging before our eyes, like some deformed and malignant embryo from a placental sac.  The look of the creature is simultaneously novel and yet familiar in a visceral, organic, and distinctly icky sort of way.

Ewww. Does anybody have a tissue or something?

The trailer also boasts the return of many of the franchise’s previous characters, including Chris Redfield, Leon Kennedy, and Ada Wong, as well as a  few of the more minor characters you may or may not remember, such as Ingrid Hunnigan and Sherry Birkin.  The reappearance of even more familiar characters has been rumored but not confirmed.

Regarding the return of our favorite characters, I couldn’t help but notice the sometimes not-so-subtle changes made to the appearance of some of the characters.  Most notably, Leon Kennedy and Chris Redfield both seem to have been “aged” and ruggedized.  Strangely, even the shape of Leon’s face seems to have changed, having lost the “pretty-boy” smoothness and the narrow look of his face. 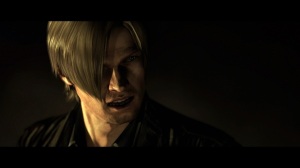 I also couldn’t help but wonder at the depiction of the CGI characters in general.   As evidenced by films such as  A Scanner Darkly, The Mummy, and Avatar, CGI has come a long way.  Yet, often video game characters seem patently fake-looking in certain ways, notably the flat, “smoothness” of the facial planes, the rigid mouth movement, and (the worst) the small, overly-even shoepeg corn teeth.

Take the CGI in The Mummy, for example.  How can the same movie contain CGI of such vastly differing quality?  The regeneraton scenes of Imotep were, for the most part, very organic looking and well done.  In comparison, the CGI depiction of The Rock as the Scorpion King is pretty sad.

CGI Dwayne Johnson (aka The Rock) as the Scorpion King

Anyway,  I kept wondering if the game designers intentionally leave their characters with a slightly artificial aspect to preserve the “video game feel.”  I don’t know enough about CGI to say.

At any rate, as I watched the newest trailer for Resident Evil 6, I found myself wondering who I had to blow to get a hold of this game before October.  (Personally, I hope he looks like Wesker Jr.)  😀