Considering my and my husband’s potty-mouth, I take full responsibility if Darling Daughter pops off with the F- bomb…   It’s not ideal, but it’s to be expected.  That is to say, we know where she learned it when I carelessly swear at a video game or something and she immediately parrots me.  Sometimes it’s even a little funny.  (And if you’ve never had to fight a laugh while chastising your kid,  maybe you need to lighten up some…)

But this morning Hubby told me something that mortified us both, and we’re both honestly puzzled as to where DD learned it.  He was changing her diaper this morning and she pointed to her private parts (which is exactly how I refer to them if I have to talk to her about them) and said “pussy.”

Are you sure that’s what she said???

Yeah, that’s what she said…

That is not a word that gets regular play around this household.  There are some words even I, in all my profane glory, find distasteful.  It’s not generally a word that gets said in front of the baby unless we are talking about cats!   So how…in the hell…did she learn it in connection with genitals?

I’m going over it in my head… who else does she see on a regular basis? (hardly anyone.)  She doesn’t go to day care or pre-school, so she didn’t learn it there.  Even if we watch TV shows with cursing in them, they’re generally not pornographic…  So how did she link that word and that body part?

I didn’t actually hear the aforementioned nasty word myself, so, regardless of what hubby says, for the moment, I am going to assume either he misheard her or she wasn’t saying what he thought she was.  It’s better for my peace of mind.

Any other parents out there have similar experiences with their kids learning strange things from I don’t know where? 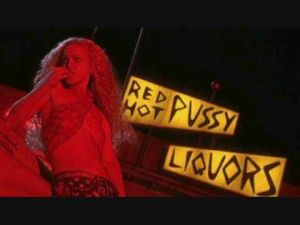