I’m not generally one of those girly-girls that are afraid of bugs and spiders and snakes.  In fact, I used to trap and release the spiders in our house back in my home state.  Or if they were small ones up on the wall or something, I’d turn away and pretend I didn’t see them (make a break for it, little dude!)

And we actually own a snake as a pet– in as much as anyone can own a snake– so creepy, slithery, crawling critters don’t really bother me.  The things that really “bug” me are the parasitic type things, the things that borrow into the skin, like ticks, and suck blood, like mosquitoes… and ticks.

But that kind a of changed when we moved to Kentucky a few springs ago.  The bugs out here just seem…heartier.  Bigger, more plentiful.  I was about five months pregnant when we first got out here, and I couldn’t seem to make it from the car to our rented house without picking up a tick.  Dear GOD, they were everywhere, even on the wooden porch!

And then summer rolled around and so did the spiders.  Not just one or two house or wolf spiders, but droves of brown recluse spiders!   I was finding five and six a day, just moseying across doorways or whatever.  One night I woke up in the middle of the night, still under the influence of Ambien, and groggily told hubby I felt something on me.  He promptly tried to shoo off a giant recluse crawling on my shoulder…and the spider promptly tried to crawl away down my back.  The only thing saving me from a total liquid meltdown was the fact that I was too drugged up on Ambien to freak out.

Then one day I grabbed a sundress off the top of my dresser and threw it on…only to throw it off again when I discovered a small spider chilling next to my boob.  I swear, a skanky pop star never dropped a dress so quick!  It was on the floor in a puddle of fabric in two seconds flat and hubby was looking at me in amused astonishment.  Luckily, brown recluses are generally non-aggressive, and supposedly go out of their way to avoid biting.

Anyway, it turned out our crawl space was filled with the things!  I was worried for myself, I was worried for the cats…and I’d had the baby by then.  We had Terminex come out, but I’ve never fully recovered from the emotional distress of the episode…

As is evidenced by the way I yelled like a bitch, then had to get control of full body shivers and a major case of the “heebie jeebies” and beg hubby to come kill the interloper  when I came across a spider in the laundry basket today.  And then my hand “felt funny,” and I’m almost certain I’ll have a raging case of necrotizing fasciitis by bedtime tonight!

And yet I still feel bad killing spiders.  I actually don’t hate or fear all spiders… mostly just those damn recluses, because even in our current apartment, they always turn up with the change of the season…like bad pennies. 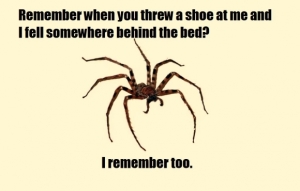 9 responses to “Arachnophobia: Is it any wonder “hate” is a synonym for “venom?””