Saturday was a very gratifying day at the shelter, and not just because it was the last few hours of volunteer work I needed before I am allowed to take my final exam.  I got to do a few new things.

When I’m at the shelter to work with the dogs, people see me with my leash and collar dangling around my neck, and my Home Depot apron full of treats, and my name tag (if I remember it,) and they think I work there… which I do, just not in the usual volunteer capacity.  I likely don’t know as much of the inner workings and policies of the shelter as those other volunteers either.  But when people ask me questions, I try to be helpful and tell them whatever I can, and if I don’t know the answer, I send them to someone else that I think would know.  I like being able to tell them about the dogs I have worked with, and try to help facilitate adoptions.

Last Saturday, while I was putting one dog back and perusing the kennel area for my next “pupil,” a middle aged guy started to talk to me about a couple of the dogs, saying he wanted one for a farm dog, but the decision was between two dogs there.  One was a huge hound dog mix, and he seemed mostly gentle and calm (until I got him on leash, then he was a ridiculously strong puller, but that’s another story.)  The other was a smaller black dog that looked like it might have had lab in it, and was severely malnourished from his time on the streets.

A recent experience with a friend who had to give her dog up after he broke loose from his pen, got into her parents’ pig pen, and savaged the pigs led me recount part of the story to the gentleman, asking him if he had cats or livestock.  He confirmed that he had cats and cows, and I suggested he ask that whatever dog he chose be tested for compatability with cats before he take it home, which is something usually not done in routine temperament testing, but only if a potential adopter has cats.  I then suggested, (trying to be clever) that perhaps the tow dogs between which he was trying to decide might get on well together and be able to keep one another company.

Long story…less long… guess who got to do their first temperament testing with the house cat, Cheddar, on Saturday?  I also believe I have the gentleman seriously considering taking home both dogs too!

This cat even sort of looks like our Cheddar…

In case you’re wondering, Cheddar gave the huge hound dog his seal of approval by rolling over on his back for a belly rub, and although he didn’t care for the higher energy of the black dog, the black dog showed no aggression towards Cheddar.

And then there was Saffron. One of the shelter managers– we’ll call her M*–  is the lady who worked with me personally to accommodate my curriculum needs. She seems genuinely happy to have me at the shelter,and last week she asked me if I would pay special attention and work with a certain dog that was still in the back of the shelter (where dogs who are sick or not yet ready to be adopted out are kept.)

Saffron was a pretty girl with coloring somewhat like a Golden Retriever (perhaps that’s why they called her Saffron?) and the look of some sort of border collie mix.  And she was painfully afraid.  She still had enlarged nipples, having just recently had a litter, although no one saw her puppies when she was brought in.  I was told that she wouldn’t even walk on a leash.

I had an idea of what I wanted to try to do with her, but when we went in to get Saffron, she hunkered down and piddled on the floor in terror.  M had to carry Saffron to the spacious room where I normally take the dogs to work in cold or inclement weather.  When she deposited Saffron gently on the floor, the dog hunkered down and peed again, and M went to go retrieve a towel and some dog brushes.  I don’t have a lot of time with these dogs, only usually able to get to the shelter once a week, but it seemed really important to be able to help this dog.  If she could not be brought out of her shell, she could not be adopted out and could possibly be euthanized.

The first thing I did was clip my martingale collar around her neck, with the leash attached, so she could get used to their presence.  All she wanted to do was lie there, making herself small, with her head on my leg.  I laid another towel down, figuring the tile floor must be cold on her dragging teats, and I coaxed her over onto the towel.  The next half hour to forty five minutes was spent sitting on the floor, petting her, talking to her, trying to get her to take treats (in my experience, dogs that are too nervous will not accept food sometimes.)  I gradually started moving around more, standing up, going to the bathroom and coming back, and I got her to take one of my “grade A” treats**.

Gradually, she came out of her shell, and just getting her to sit up and hold her head up while I sat in a chair seemed like a huge improvement, making her seem like a different dog.  I started picking up the leash more frequently, still petting and talking and praising, and encouraging her to follow me around.   If I stopped petting her for too long or she thought I wasn’t paying attention, she’d nudge me or put a paw on my leg.  We even went outside for a bit, and she seemed to do better in the sun, on the concrete and grass.  She stood alert and proud, looking like a regular, happy doggie, although she still came back to me from time to time for encouragement.M even brought her dog Alex out, a big ol’ friendly lab, and Saffron did extremely well, allowing Alex to sniff her and say “Hi.”

It took some coaxing to get her to go back inside.  Around this time, I felt like it was time for me to go home.  I would have loved to bring her with me, but I’m pretty sure hubby might have murdered me for bringing home another animal.

Saffron seemed to have improved quite a bit in just the two hours or so I spent with her, but she would still not walk very far on the leash without getting nervous and balking, so I asked for help carrying her back to her kennel, and I reluctantly left her there.  That quiet time spent with her, calming her and helping her to come out of her shell a bit was very rewarding for me, and I think she even sort of bonded with me a bit.  I hope I get to work with her again, but as long as she gets a furever home, I’ll be happy. 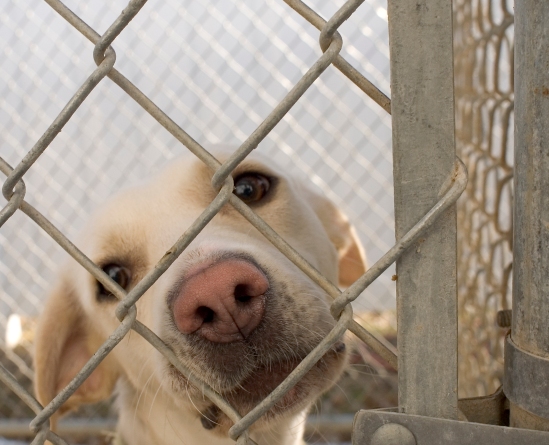 ** Part of my particular school’s teachings is that when training you want a variety of lures and rewards, ranging in desirability.  Adequate performance might get a grade C reward/treat, while excellent performance might merit grade A rewards or treat “caching.”

12 responses to “A Saturday at the Shelter”