Scrubs and Psych two of my favorite shows right now.

Both shows feature extremely close friendships between two male protagonists, often dabbling in behavior that seems to defy acceptable dude-code(1)(2) .  While the relationship between J.D. and Turk is certainly entertaining, though, it’s the complimentary relationship between Shawn and Gus that really amuses me.

Shawn is clever and funny, but often short-sighted (oh the irony) and narcissistic.  Gus is the responsible one, and can be stuffy at times, except for any time he sees a good-looking woman, at which point he becomes some goofball rico suave.   But he’s still my favorite. As my hubby says, Gus is one dapper motherfucker, and for some reason, I laugh every time he says “You know that’s right.”  Plus, while extremely impressive,and even enviable, Shawn’s skills of observation would often be useless without Gus’s ability to give them context with his store of practical and book knowledge.  They are peas in a pod.  Bros.

At any rate you may imagine my amusement (and secret pride) when my husband teasingly compared these bromances to my and my best friend’s behavior when we are together.  My best friend and I have “been together” since we were in fourth grade (that’s 23 years, give or take,) we’ve been through a lot, we went to school together, we got high together (we subsequently got in trouble together.)  We’ve had ups and downs, been separated by people and miles, and there is nothing we wouldn’t do for one another.

So without further ado, why my and I bestie have a chick bromance :

We tell each other the harsh truth and don’t take it personally. 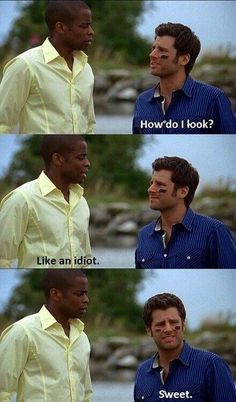 We can disagree and even “argue…” and then we’re over it.  No drama, no grudges.

We’re both married but not much has changed… 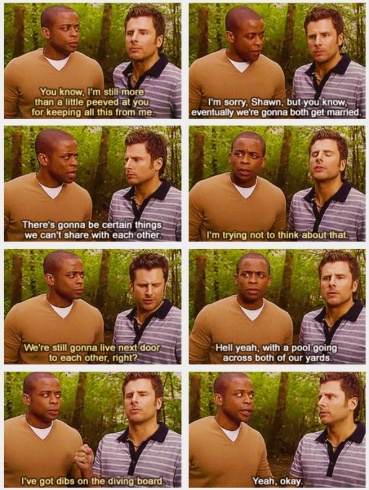 We’re at home in one another’s homes…

And we probably know one another better than our own spouses.

We’re not afraid to be stupid together. 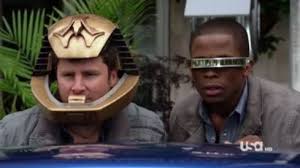 We respect and even compliment one another’s differences.

We’ve always got each other’s back.

And we know we’ll be friends until we’re old and gray.