*If you are in a bad place or grieving a furbaby, this may be triggering.

Not even two weeks after the passing of my Bengal, Chloe, we are fighting what seems to be a losing battle trying to save my beloved boy-cat, Methos.   He is dying.  I didn’t want to believe it, but after watching two cats go in similar fashion, I think I know it.  And I am not okay.

He seemed to be doing well after his diagnosis in December.  On BP meds, he had gained back some weight and was up to his old antics.  Not two days or so after Chloe died, he started having breathing troubles.  We put him back on Lasix (he never should have gone off, probably, which is something I may never forgive myself for.)  I have babied him, bought him several different kinds of special food, which he ate at first, but now he refuses all food and seems to only drink water if I put it under his nose.  He no longer bothers to get up to go to the litter box.

I have always known a piece of me will die when Methos dies, but it is a price we pay for loving an animal.  But I am not okay.

I have already talked to the vet, asking him if I should keep Methos here so he can die in comfortable surroundings, or bring him in to be euthanized. I don’t want him to suffer but I also don’t want him to be stressed and afraid (which of course he will be if we are forced to make that trip to the vet’s.)  The doctor of course was reticent to give advice, but the general idea seems to be as long as he isn’t really struggling for air or otherwise in serious pain, to let him go his own way.  But it is torture for me.  I mean, he is doubtless tired and at least a bit uncomfortable, but watching him this way is probably more painful for me than for him.

I dread finding him dead, but I also sort of want it to be over, because this is just too much.  Anyone who has ever held a dead animal in their arms, one they loved, would understand, and it is this memory (of Neeners and Chloe) that is making this even more agonizing.  But I want to do what is best for him, not for me.

I know I will get through this.  What choice?  But it’s going to suck.  A lot.

And that’s not even counting how to help my daughter with this.  He has been her best friend since she was born, (and mine since even before that.) 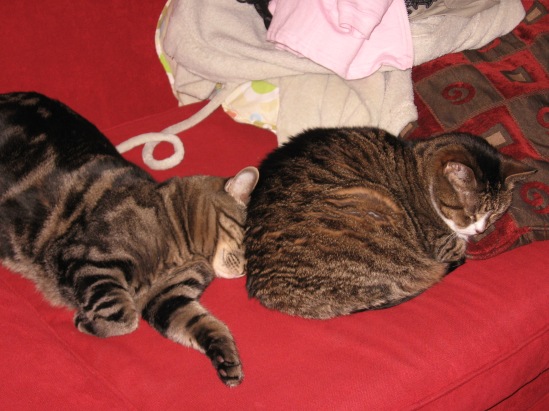 Methos and Neeners; probably the only reason he was allowed to be this close to her was because she was sleeping…

I am sure  I will write more later, but for right now, I think I will try to spend as much time with him as he will allow.  ❤

EDIT*-  7/20/2017 Methos left us this morning around 2 AM.  I am still far too emotional to write a separate post, and just thinking about it is very distressing. I have been crying off and on pretty much all day.  I feel like I could cry at the drop of a hat.  The house feels empty without him.  There will never be another like him, and I am glad our family got the opportunity to love him. ❤