I’ve been very lazy of late… Don’t judge me! I wanted to have a new Maynard post ready for today, to celebrate my favorite musician’s birthday, but I’m sleep deprived, and I have cramps, and I just realized my old Victoria’s Secret underwear has become my period panties and my new Joe Boxer underwear is now my good underwear, and that just hits me on a very emotional level.

Happy Birthday to my favorite person I wish I knew but actually don’t, Maynard James Keenan.  One of my all-time favorite artists who, I am happy to say, is still among the land of the living, and still making kick-ass music.  If you need even more reasons why I love Maynard, check out these videos of Maynard…being Maynard.

I know what you’re thinking, and no, I have not been hitting the NyQuil too hard.

They say that the sense of smell is the sense that is most closely tied to memory, but I’d say hearing, specifically music, comes a close second.  For me at least, music often evokes feelings, phantom emotions from the past.

My main musical lifelines are still mainly the alternative and industrial bands of my teenage years and early twenties; Tool, Soundgarden, Alice In Chains, A Perfect Circle.  Hearing that music recalls the bittersweet feelings of a time that was paradoxically simpler, yet more difficult.  It often makes me long for those long gone days.  This is the music which still most strongly affects me, the music with which I still most closely identify, and the music through which I still have a voice for my emotions and ideas.

Though the musical identity I began developing around middle school is markedly different from the music I grew up listening to, my tastes are eclectic enough to leave room for many types of music, and there are more than a few songs that I heard growing up which strike a “memory” chord for me.  My parents’ music.

Some are technically early eighties and nineties pop songs, I suppose, but some are songs I heard when my parents played their records (yes, you read that right) or listened to classic rock and oldies radio stations.

Many of these songs bring to mind remnants of feelings or thoughts I had at the time, a sort of revival of the ideas I had about the music;  I remember what those songs meant to me through the ears of a child.

And a couple of the songs are associated with television shows or films, and evoke the emotions caused by that particular show.

Here are just a few of those songs, in no particular order.  I even own one or two albums by some of these artists.

As you read the list, keep in mind I was born in ’81, so the categorization of the songs is relative to that.

Kansas— Dust in the wind (The Highlander TV series)

U2– With or Without You (pop radio)

Rolling Stones— Give Me Shelter (radio)

Anyway, I can’t recall all of them at present, but you get the idea.  What are some songs you remember from your childhood?

When I go home for Christmas, I wanna get my arm worked on, working towards a half-sleeve.  This is what I have there now.  Kinda hard to see, but it’s a raven on a crescent moon, under a willowy tree.  One artist started the tat, and worked on it twice.  I decided two chances was enough, cuz he couldn’t quite get it how I liked it.  A guy I used to date who tattoos practically begged me to let him “fix it.”  He added all the color and swirly clouds and tree roots and stuff, but there wasn’t much he could do to bring the bird out anymore. 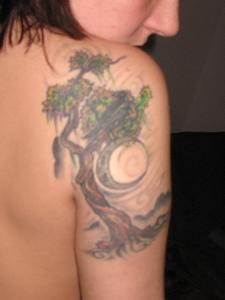 Anyway, I had a visit from the insomnia monster last night.  SO much stuff going on in my mind– sorrow over the recent school shooting, the song “Thomas,” by A Perfect Circle (my love of Maynard should be well documented by now,) and ideas for tattoos…  I was sad but anxious and excited.  My stomach was upset, which is not uncommon if I get too anxious… so at about two in the morning, I ended up sitting on my living room floor, hubby asleep on the couch behind me, listening to A Perfect Circle and drawing.  I don’t get to draw much anymore.  I have a LOT of activities I’m interested in- writing, drawing, volleyball- and I have a two year old.  Some things are bound to get neglected, and it seems like my drawing is one of them (so is housework 😀 )

So, without further…pontification… this is what I came up with last night/this morning.  I’d like the whole half-sleeve to be a raven motif.

Sorry for the poor picture quality, but if I can get in touch with my artist, give him this idea, and then let him freehand the rest, it’ll look badass!

And now, for your musical enrichment and listening enjoyment, “Thomas”:

I’m still kind of like a little kid at Christmastime.  Now that I’m older, I can get excited about giving presents as well as getting.  I’m not gonna lie; I like getting presents. For the past couple of years, hubby and I haven’t been in a financial position to exchange gifts for Christmas, birthdays, or anniversaries.  But that doesn’t stop me from “window shopping.”  So here’s my “Wish in one hand” list.

First, I’ve been wanting a new pair of boots for a while now.  Although my knee-high hooker boots have seen better days, they’re still wearable.  But I still want a new pair, with a lower heel. 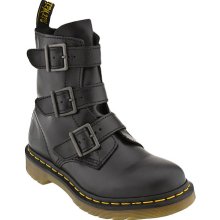 Doc Martens, my old-school favorite. I still have three or four pairs around here…but, they don’t have buckles. 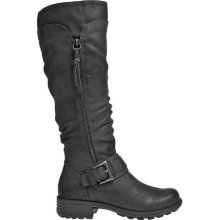 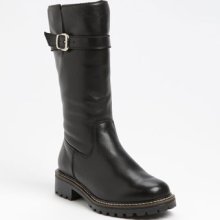 Martino “Logan” Boots…a nice cross between the above two…and still with the buckles.

Next on the list, money for some more ink.  I can’t be wearing these bad-ass boots without some new bad-ass ink to go with it.  I wanna work on a half sleeve, adding to what I already have on this tattoo:

And I also want to get a new tattoo:

A Perfect Circle…cuz Maynard‘s the man…  I think I’ll have his love child.

Well, there are a crap-ton of things I would love to have, and a crap-ton more me and my family could use, but at present, these are the top things I want, that I am unlikely to be able to afford on my own anytime soon…hence the name of the list.  Oh well…

Guess I’ll have to settle for family and fellowship and all that shit… I mean, all that great stuff!

But seriously…I am looking forward to Christmas this year because I get to go back to my home state and see my family… with my husband this time.   Last year I flew back, just me and the baby because hubby couldn’t get off work.   Managing airport security with a one year old and all of her accouterments is pure hell!  This year, hubby is coming and my baby gets to see her extended family, which is all I can really ask for.