Business (the dog traning one, anyway) has been slow…reeeeally slow…lately.  My kid has summer camp during the days.  At least the lack of client appointments lately does leave me time to pursue my other hobbies and endeavors, namely art.

I have been drawing a bit more, some brainstorming for my impending date with my tattoo artist, and even have had some requests for some pet portraits.

Last night a friend saw some of my newer art and proposed we do a graphic novel together.  It would be a huge undertaking, especially given we live several states apart.  I have always been sort of skeptical of my ability to draw effectively in that style…so I toyed around with some pencil, pen, and marker tonight for a bit.  This is what I ended up with… 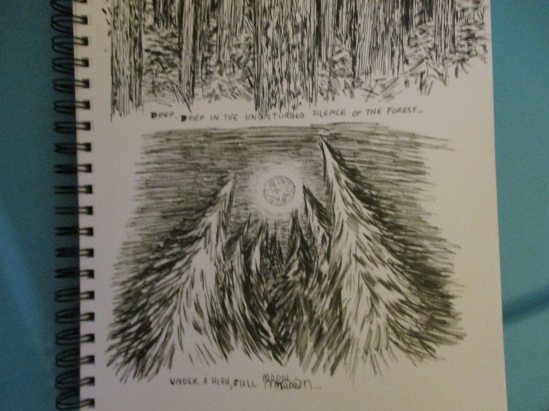 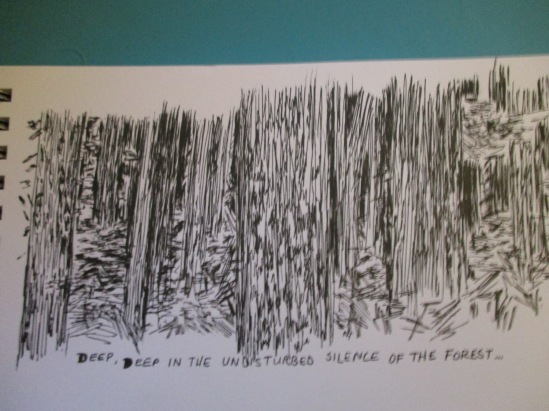 Bought an unfinished, plain hinged box at Jo Ann’s and painted it up for my daughter for Christmas.  Added some jewels and glitter glue, and am in the process of “shellacking” with special Krylon spray. 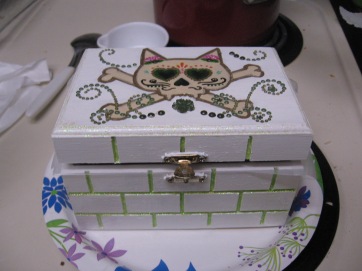 Sugar Skull designs have actually become somewhat popular in American culture, often as clothing designs, artistic renderings, or even tattoo designs.  I am drawn to them personally for their juxtoposition of beauty with the seemingly macabre.  But sugar skulls are more than just a pretty knick-knacks to culturally reappropriate for cool tattoos and t-shirt. They are part of the traditional Mexican holiday celebration for Dia de [los] Muerta, (many cultures around the world have similar holidays to remember and honor the dead) and are part of a longstanding and wide spread celebration and remebrance of the dead.  Far from being a sad or somber day, Dia de Muerta is a festive occasion, and sugar skulls are created with specific deceased relatives or friends in mind, often even inscribed with their names, and then placed on the gravestone in the hopes that it might encourage the deceased to appear.

The other day a friend of my posted a picture on FB of some pretty sugar skull cat figurines and I thought, I must have those.  So I followed a link and found them on Etsy. And then I saw how much they cost, presumably because they were hand-painted, and I thought, well, shit, I can do that.  So I rehabbed my gramma’s old siamese cat salt and pepper shakers.  Additionally, I decided to make one of them specifically in honor of my departed Neeners.  (Neeners has been a bit of a hot topic around here this week.  My daughter saw a photo of Neeners on the refrigerator the other day and told me she “wanted Neeners,” and I had to explain to her that Neeners had already died quite a while ago, when Darling Daughter was still a baby.  The news did not go over well, and to tell you the truth, by the time I was done trying to comfort her, I was practically ready to cry myself…)

Anyway, the original shakers had a bit of gloss to them, so the acrylic paint I used kept wanting to peel off if I touched it the wrong way, but hopefully the coats of spray finish I put on it help with that. They aren’t quite as detailed as the ones I saw on my friend’s post, but I’m pretty proud of them for my first go around.  I think I’ll be on the lookout for all sorts of flea market cast-off to rehab now! 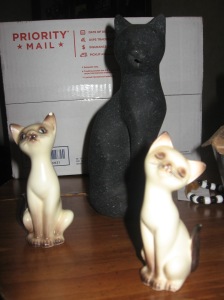 A while back I posted some progress pictures of a piece of art, four Horses of the Apocalypse, I was working on for someone.  I realized today that I never posted the final product.  I was working off of a photo my mom found on the internet, but the I kind of gave myself artistic license with the colors.  XD

It turned out okay, but I am pretty critical about my artwork and I can almost always find something I could have done better.  For instance, the colors on this one aren’t blended nearly as well as  “Rosie.”   And these are just photos of a drawing (I don’t have any of that high tech scanner stuff 😉 ) but I guess as long as my mom is happy with it (and I don’t have to look at it all the time), it’s all good.

Bad photo but you get the idea. 🙂

Four horses of the apocalypse (without the horsemen. ) Commission is in quotes, because it implies I am getting paid.  Haha! I am doing this one for my mom, at her request. Pencil and Prismacolor.  I am almost out of black pencil.

The renowned Swiss artist H.R. Giger has died at the age of 74, as a result of injuries sustained in a fall. Giger, who passed away in a Zurich hospital, was most famous for the alien monster he created for the movie of the same name. (source)

Even if many people aren’t familiar with the vast majority of Giger’s work, almost everyone would recognize the frightening yet somehow vicious beauty of the Xenomorph creature from the Alien films.

Giger’s so-called biomechanoids represent a large share of his work. His representations of these creatures is a mixture of human and mechanical parts, with a strong focus on sexuality that can be disturbing for the viewer. 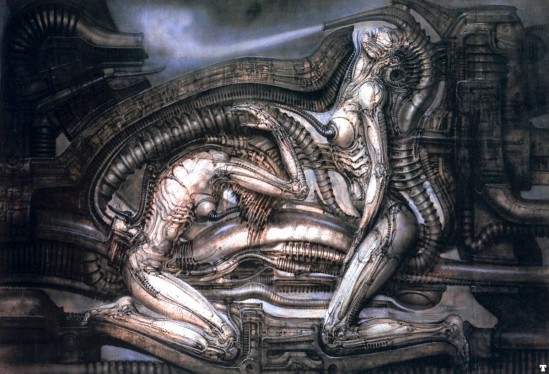 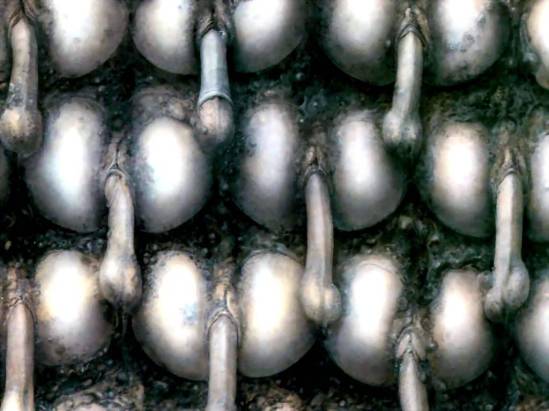 While not all of his art is sexual and explicit (okay, most of it is…), all of it is darkly unique, thought-provoking, and emotionally stimulating.

Love it or leave it, the world has lost an incredible artist.  The king is dead.  Long live the Alien King.

I’m going make this week’s prompt another short story in the same series.  You may find all the previous installments under the title “The Cycle,” with a theme and number, in the Hive Index.   I’ve been lazy about my fiction, and lately a reader has asked me about this story series, so…here goes.

Angela had spent the whole weekend with her husband’s journal.  That journal and not much else.  She took the phone off the hook.  She didn’t eat.  Her path through house consisted of a truncated and zagging path between the armchair by the cold fireplace, the refrigerator where she kept multiple bottles of Evian, and the bathroom on the first floor.  It had been hard enough to sleep in the bed her and her husband had shared, ever since his crimes were laid bare…literally.  After she found the journal and read the first few entries, Angela gave over the idea of sleep completely.  Every time she closed her eyes, a fusillade of gruesome images kept her from achieving anywhere near the peace of mind required to relax into sleep.  Most of the images were montages conjured by her own mind– the few details the detective had shared with her from the crime reports , and the faces of the women as they had been before her husband had “fixed” them.  With these details, and the sickly ambiguous writing in her husband’s journal, prose that were somehow equal parts self-important, saccharin, and terrifying, Angela tortured herself with vivid scenarios of what had happened to each of the women.  In these scenarios, she recognized her husband’s face, his handsome face, but his eyes burned with the light of insanity, practically glowing, like the eyes of a comic book demon.

That he thought of these women, his victims, as finished products– as his art– was sickening.  That he thought he was “fixing” them, making them better somehow, like a craftsman repairing a piece of broken pottery with powdered gold, was untenable.   But his vanity and the truth of his hedonistic pursuits were revealed by the fact that all of the women had similar characteristics.  Petite, pale blonde hair, tiny aristocratic nose…   Fragile looking, yet with an undefinable verve.  Like a flower.

Jill.  It was impossible to tell if the obsession had started with her, or ended with her.  Were all his victims merely substitutes, or were they practice for his endgame?

Or had Jill’s disappearance merely been a result of her conveniently fitting his ideal victim type?  No.  There she was, fooling herself again.  At the very least, he knew who Jill was when she had taken her.  She figured in to all of this somehow.

All of these horrid images and ideas chased one another through her mind, keeping her restless and nauseous, and wearing at her sanity like an angry dog wearing a groove in the ground at the end of its leash. 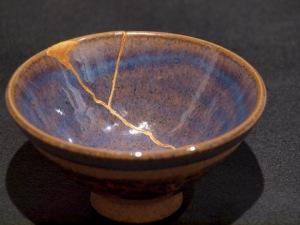 I did a small felt tip, pencil, and Prismacolor for my friend’s daughter’s room, a reproduction of the Shel SIlverstein’s poem “Hug O’ War” and accompanying artwork.  Tried to emulate the squiggly style of the original art as best I could (was actually some work!) 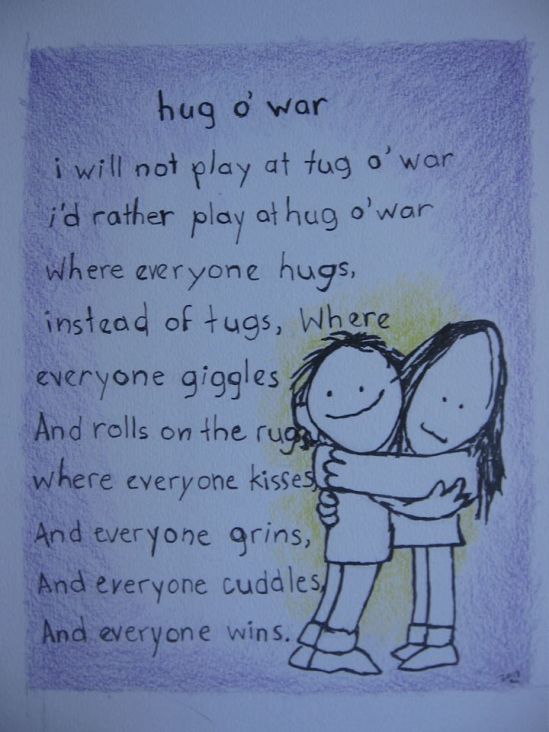