This morning was…awful.  I’m not often very free with the whole “FML” thing that gets so much play on Facebook, mostly because it’s usually said apropos of some self-indulgent, first world problem.  As in:

“On noez!  Didn’t sleep a wink last night and my cat drank the last of the coffee this morning! FML!”  … Or…whatever.

But I swear, yesterday and its transition into this morning definitely made me feel like busting out the “fuck my life,” for realz.

Let’s start with around Monday morning when I woke up with a pretty decent sore throat, worse than any I usually get.  So I plied it with Lipton Noodle soup, ice water, and popsicles.  My sodium Monday night was probably in the stratosphere from all the packaged soup.  I took an Ambien to try to get some sleep, and ended up eating ten Ricola cough drops at some point in the night…and some peanut butter I don’t remember.  Between my slightly clogged nose, and having to pee from all the water and soup I drank, and my throat of course, I didn’t sleep very well.

I had some mild sinus issues, sinus pressure, clogged nose, an occasional sneeze– really less severe than any cold I ever had– but that sore throat was kicking my ass!  Felt like I swallowed razor blades.  Long story short (at least this part,) I was worried about strep so I went to the clinic at Walmart (because I didn’t feel like wasting gas and driving 20 miles out to see my NP.)  “Quick Strep” test was negative.  Diagnosis:  Still could be strep, or maybe develop into tonsillitis, so “Here’s a script for Amox to hold onto in case it doesn’t clear up in a couple days.”  Diagnosis: prob some allergy/viral thing.

After I left the clinic, throughout the afternoon, I developed this unproductive, hacking cough.  My throat just got worse and worse.  I tried everything I could think of.  Gargling with Listerine and salt water and peroxide, drinking hot soup, eating popsicles, drinking icy smoothies; I plied it with hot and cold all day long again.  Benadryl, benzocaine cough drops, Musinex, Aleve, Tylenol-3…   Nothing helped, and I’m sure some things made it worse.  I was in so much pain, and couldn’t sleep.  Kept feeling compelled to cough, which just irritated- no, destroyed– my throat even more.  Basically between the extreme pain and the coughing, my throat started to swell.  This kept the coughing going worse.  Do you know how impossible it is to deny a cough reflex?  I started to wheeze and have problems breathing.

At about 12:30 am (Wednesday) we dragged my little girl out of her peaceful slumber and headed to the ER. 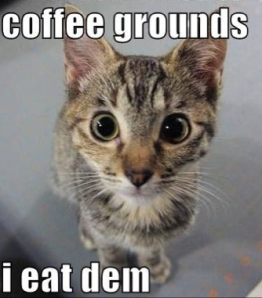 This is where “shit got real.”

The trip from my apartment to the hospital is like 4 minutes.  I shit you not.   Nevertheless, disaster managed to strike.  A beautiful young buck running in the grassy area on my side of the road.  I won’t say the rest was slow motion, per se, but I remember it in pretty vivid detail.

The deer kept running, doing his dodgy little hops to where you can never tell precisely which was they are going to break and run in the end.  But of course, of all the ways he could run, he chose the road.  Hubby had slowed some, but he was actually looking across at the other side of the road for the deer.  We hit it, not too hard, but hard enough, and it seemed to roll/ slide across the road as we went by.  We slowed to a stop and pulled over, and my eye was out the rear window at the deer, which had come to rest directly in the middle of the road.  We asked J* if she was okay; we all seemed to be fine.  I was really upset, upset that we had hit the deer, upset that my child saw it happen…  I had forgotten my phone so I told hubby to keep going to the hospital and we’d call the police from there to report it…

And then the deer sat up, and started flopping its back end in a spasmodic effort to get up.  And I lost it.  It was still alive, but too injured to get up.   I was crying, but without tears, and trying to keep a hold of myself for my kid’s sake.  She would ask “Mommy, ‘kay?   ‘S wrong, Mommy?”  And I just said, “Mommy doesn’t feel good..”  Meanwhile I’m also thinking, oh, this is great for my breathing, this is all I need… and

What do we do?  It’s still alive.  We don’t have any way to put it out of its misery, and even if we did…   and, perhaps somewhat improbably

If this feels this horrible, what do people that hit other people feel like???

Someone had stopped to ask if we were okay and hubby had waved them off.  But they had turned around and sat about 100 feet back behind us, where the deer lay.  I guess they were maybe sitting there so no one unsuspectingly came along the animal and wrecked, or maybe they were waiting to see what we’d do (or waiting so we’d leave and they could take it home to eat???)

When we got to the hospital, I rasped out what happened (by this time my voice was mostly gone, and talking above a whisper was very painful.)  The nurse called the security guard and as they were discussing the exact location of our unfortunate accident, she said, it had come over the scanner; someone else had called it in.

So back to my original problem… I sat in the ER and waited…. miserable.  Miserable for my husband, who had no sleep and a budding migraine and had to work at 8am.  Miserable for my little girl, who was nonetheless extremely pleasant and peppy for being woken in the middle of the night.  Miserable for that deer.  The moment the deer impacted the grill of our truck (which is demolished, btw) I felt it in my heart.  How to explain.  There’s no logic except for that strange sort of self-flagellating logic– “this is my fault, if only I hadn’t made him take me to the hospital, I’m a shitty navigator, I should have told him where the deer was, he’s gotten no sleep and now he has a migraine too and …if only we had killed it outright, I hope someone put it out of its misery soon, it didn’t die but it will and we killed it, nothing should die on the road like that…”

Ironically, when I mentioned to the doc we had hit a deer on the way over, he basically congratulated us.  I think he asked us if we took it home, so he must not have realized that we had literally just hit it.  I guess that’s Kentucky for you.

So… you wanna know what happened to me?  Thanks for asking.  Real quick– x-rays of soft tissues in my neck, nebulizer breathing treatment, steroids to also help the reduce massive swelling in my throat.  Ativan after the nebulizer treatment made me jittery/shaky/anxious wonky (it’s a mega stimulant, and you guys know I’m already a bundle of nerves.)  600 mg ibuprofen for the pain (THAT didn’t do squat, ya know, but at least I could breathe again.)

Being able to breathe, all the aches and pains from coughing all day, my chest, back, and neck, surfaced.  And I was soooo tired.  Physically, mentally, emotionally.  I dunno if you’ve even felt it, the way that sustained pain and anxiety can take a toll on your body.

My throat is still extremely raw and sensitive, and now that the “inciting incident,” as the doctor so aptly put it, is over, the aftermath.  Trying to forget the look of the deer trying in vain to gain its feet.  The worry about how hubby is doing at work on four hours sleep and a migraine, the hospital bills that will come in the mail (just add it to the rest of the hospital bills.)

at least I can breathe…