So…the other day, and not for the first time, I was rubbing the cat and discovered a mysterious “bump” hidden in the fur.  This time it was on his belly.  the last couple of times I found suspicious lumps in his fur, they ended up being nothing more than a lose piece of skin and fur, or maybe a small scab from a healed abrasion.

To his credit, Methos lay calmly and let me dig through the fur on his belly to isolate what I now thought of as “the weird growth.”  I think he just assumed he was enjoying a very localized belly rub.  I isolated the growth, this dark little brown lump that looked not unlike a mole.  I considered and then briefly dismissed the possibility that it was a nipple, as when I felt around I could not locate the other nipples.

So I did the only rational thing I could think of; I poked and squeezed at it to see what I it would do.  It was kind of odd.  At times it seemed to stick half in and half out of the skin, almost like a small tick (I frickin’ hate ticks, by the way.)  Then I got the tweezers, determined to detach it from the cat.  I tugged and tugged, but it was a slippery little sucker.  I’d think I had a hold of it only to have it slip through my grasp.  Whatever it was, Methos didn’t seem to be having any discomfort from my “ministrations,” and I eventually came up with a little scale of what looked the skin or scab from the top of the “lump.”  But still the brown lump remained.  So I called hubby over to look.  I squeezed the skin around it again, and it sort of protruded out from the surrounding skin.  The following is the general conversation that following, albeit, probably not verbatim:

ME: But I looked for his other nipples and couldn’t find them.

HUBBY:  I think that’s a nipple.

{Then follows five minutes of shame and horror, probably for me and the cat.}

Lesson learned?  Don’t try to detach things that are attached, unless you are positive of what they are, or at least what they are not. 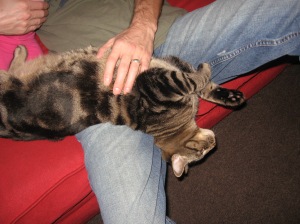 Methos, in one of his “comfortable” positions on hubby’s lap 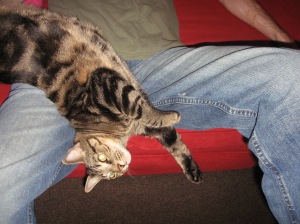 WHOA! Hold the phone. Everybody out of the pool!  My trip down memory lane just took a wrong turn!  More like it was derailed.

Was on the interwebz looking up some of the old cartoons that I remember from my childhood so I could show some of them to my toddler.  She especially loves anything with music.  So we got through the Charlie Brown Thanksgiving special and that Garfield Christmas show.  So I went on to look  for A Charlie Brown Christmas.  I hadn’t found the whole episode, but had stumbled across some Charlie Brown episodes I didn’t remember seeing as a kid.

*spoilers for Why, Charlie Brown, Why?    Yes, I actually put in a spoiler alert, cuz you never know who would be pissed if I ruined the ending of this kid’s cartoon for them.

And that’s how I ended up watching Why, Charlie Brown, Why?  Charlie Brown shows have always had their melancholy moments.  Charlie Brown is usually outcast or made to feel unloved in many of the episodes, and there are whole passages where there is little to no dialogue, only a strange piano music (that reminds me of the Cosby Show.)  So as I watch this particular show/episode, it opens with Linus noting the peculiar amount of bruises on his little friend’s arms.

Ooookay.  Well, these kids talk about some weird shit sometimes, and in an even weirder adult manner.

The little girl, whose name is Janice, mentions she never used to bruise so easily.

Noooo.  They wouldn’t do an episode about that…

References to her feeling ill and thinking she has a fever.

I stopped right there and looked up the episode on Wikipedia.  Yup.  It’s about cancer.  Airing in 1990, it is considered the first animated series to tackle the subject. 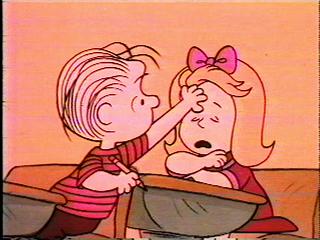 Granted, as I continue watching, I note that the explanation of Janice’s leukemia is vastly simplified.  I understand the show is addressing the issue to a fairly young audience, but it occurs to me as I watch that it does children no good to have this issue sugar-coated.  For instance, when asked if she will die, Janice explains that there are treatments for leukemia and she thinks she’ll get well.  Sadly, we as adults know that this is often not the case.

The process of her treatment (chemotherapy) and the effects it has on her health also seem a bit simplified as well.  But I guess in such a case, it would be left more up to each individual child’s parents to decide how much explanation their children could handle in regards to the subject of terminal illness. 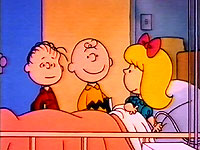 To the writers credit, they also attempt to address issues that are tangential to the idea of a child returning to class after having undergone chemotherapy, such as ignorance, bullying, and insensitivity. For instance, Janice returns wearing a pink ball cap, having lost her hair.  Linus ends up having to defend her when another little boy teases her about her cap and her baldness.  Linus grabs the kid and shakes his fist at him, all the while yelling at him about how he has no idea what Janice has had to go through.  The  other kid, properly chastened, apologizes and tries to make up for his meanness by complimenting Janice’s hat.

There is also a segment of the show that also seems to touch on Janice’s siblings and their feelings of loneliness and jealousy over the “attention” that Janice is getting because of her illness.

In the end of the episode, Janice returns to school once again after some more treatments and she whips her hat off and her head is full of hair again.  Guess this is supposed to signify she is “all better.”  End of story.   Well, yes.  Vastly simplified.  No mention of remission or recurrence.  But, hey, it’s for little ones.  Or maybe the show’s writers should leave the heavy topics to the parents.

What’s your opinion?  You can check out the episode HERE.  It’s not very long.  I realize now there are many shows that tackle serious subjects for a younger audience, and I would guess that the newer shows and ones like these each have their merits.  Weigh in, if you like.

On another note , there are clearly some episodes of these old shows I missed.  Maybe that’s for the best.