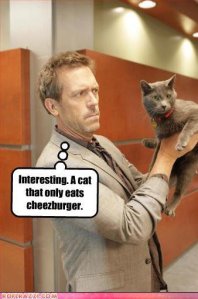 He’s been whining a lot more lately, following us around, tangling under our feet, meowing loudly at night… and the only explanation I can come up with is that perhaps he is reacting to my husband’s increasing impatience with him, and it’s all for attention.  Methos is always pushing his presence, climbing on laps, headbutting, stepping on balls…   If at all possible, he will attempt to sit on me, Hubs, and the baby at the same time as we sit on the couch.   And lately Hubs seems to be forever pushing him away, and not always politely.  On the increasingly rare occasions that Hubs does allow Methos to sit on or with him, the stupid cat looks so content it‘s pathetic.

But anyway, like I said before, he’s always been bizarre.  Lately here he likes to jam his face into a corner or crook when he sleeps.  And he’s been making himself comfortable in all sorts of bizarre yet adorable ways.

Let’s call this Exhibit A: upside-down on hubby’s crotch

I think here the appeal is perhaps obvious; belly rubbing and cerebral hypoxia.

Exhibit 2… I mean B: The Invisible Ottoman

Nestled into the arm of the couch, feet hanging off…

The screen of my Netbook makes a lovely pillow.

Yes, despite his tendency to constantly get into shit, his repeated attempts to escape every time we open the front door,  habit of stepping on sensitive body parts…  he’s a sweet little bastard.  And he’s getting better about allowing my two year old to “hug” him in a strangle hold or use him as a body pillow, so that’s “Plus Points” for him.  And he does put up with my stupid bullshit, like when I accidentally try to excise a body part, or spray him with a household cleaner, thinking it’s a water bottle.  I guess I’ll keep him around a little while longer.