A friend of mine made an eloquent point on Facebook today (how’s that for irony; eloquence on Facebook!)

Don’t be intolerant of my conservatism and ask me to be tolerant of your liberalism.

While I do agree with this, especially in light of the whole Phil Robertson debacle, my take on it is this:

I personally do not feel I am intolerant of conservatism, so much as I am intolerant of the almost compulsive need many conservatives  have to try to legislate their beliefs. In other words, it’s not enough for them to live by their own beliefs and rules; they want make their rules apply to everyone. I mean, for instance, if liberal policy allows gays to marry, a conservative does not need to “be gay” and/or get married if they don’t agree with it.  A liberal will not try to pass a law forcing a straight person to get “gay married.”  However, conversely, many conservatives feel the need to actually try to keep OTHERS from getting married and living the life they want…. See what I mean?

Also, as pertains to Phil, I do feel sorta bad he got fired. CQ essentially laid a trap by asking him questions to which they already knew the answer, and A & E then punished him for his honest opinion.  Personally, I think A & E has hitherto cashed in on the brash, unapologetic nature of the Robertson family, only now distancing themselves when it becomes too “controversial.”   That said, Phil should have know better.  The best answers to questions like the one he was asked are usually as short as possible.  Admittedly I do not watch the show; I’ve heard about it and had little desire to see one more reality show where people are rewarded with fame and money for acting like dicks, and Robertson’s remarks just seem to validate my decision to skip this particular show. 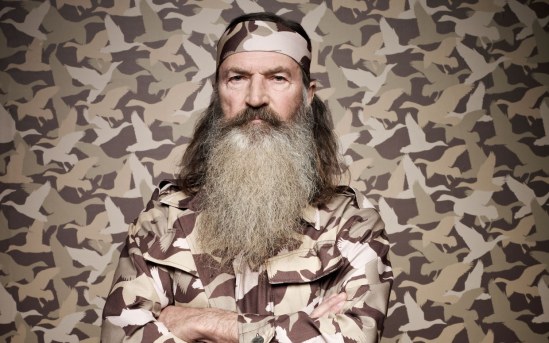