Feeling rather frustrated today.  It’s really pretty outside, and nothing is awful, per se, so I feel a little weird complaining.

But I’m gonna, because, well, if you can’t complain about shit you can’t change, what can you do? (Hardy Har)

Since tapering off the steroid, my hives are back, along with the acid reflux my Singulair is giving me, magnified.  Today, the acid is creeping into my throat and making my neck and tongue tingle and hurt as well.   I had a pulmonary function test this week, and was surprised to discover that aside from my “asthmatic episodes,” I actually have a slightly better than normal lung capacity.  So…yay me, I guess.  But I feel like shit today.

Then there’s the training job I was passed over for…after MUCH work and, apparently, much miscommunication…of the sort where apparently the business development manager from NJ, who I have been collaborating with all along, thought something I was supposed to do a certain way, and I neglected to pull the details of that “something”  out if thin air with my telepathic powers of omniscience.  Mind you, this is the second time he has been disappointed in me already, for failing to know I should do something in a way he never told me to do it.  Already, I am so disappointing and he has never met me.

So after telling me, via e-mail, that he gave the local position to someone who could offer more classes, he also gently chided me for failing to    take the initiative…yes, that’s it, to go in and meet the new local manager before I even secured the job in question.  And then… wait for it…he offered me the possibility of a position in a store farther away.

Now, set my own personal disappointment aside, I have just also officially learned that DH was passed over for promotion at his job…AGAIN… for some one LESS qualified…AGAIN. Because he doesn’t kiss the right ass or he isn’t related to the right people.  Yes, this is actually how it works at his job and no one really does anything about it, for fear of losing their job if they speak up.  And all this favoritism never seems to bite management in the ass either, because there is always someone who has to clean up the mess (my husband, for instance) that  the “teacher’s pets” have made.

Sorry.  I know I am grumbly, but I am feeling very jaded today.  In fact, I think I will delve into my growing folder of JPEGs and GIFs saved specifically for hard to express emotions to illustrate how I am feeling.

Next comes the visceral gut response.  Seething fury and frustration. 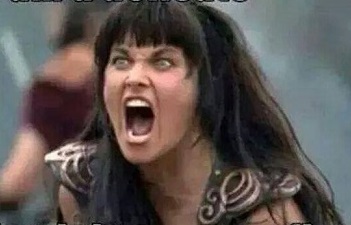 Usually accompanied by flagrant use of profanity and/or hard liquor.

And finally, and this is the longest phase, most likely continuing even after “acceptance…”  And that is abject disgust:

No one does “disgust” better than Prince. 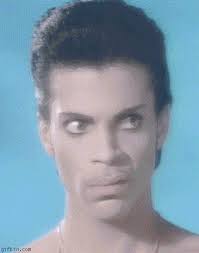 So, if I accomplished nothing else by complaining on the bloggie today, at least I will have given you the gift of GIF.  (Baddum bum!)

My regular readers know I’m becoming quite the misanthrope in my old age (that’d be 31.)   The world is a lot smaller now that we’re all virtually connected via the internet.  Everyday that I’m online, I’m bombarded with information, a lot of it bad news.  War, famine, rape, death, abuse, injustice.  People doing horrible things to the Earth, animals, each other…their own children.  It’s always been around, but now we’re ever more aware of it, and it seems to be getting worse.

Becoming a mother has made me hypersensitive to the atrocity.  I hate this world we live in.  I hate these people who can’t see past their own id.  My heart breaks for the innocents, and I’m often afraid for my child, who has to grow up in… a sea of crazy people.  I wonder what we can do to effect a significant change in people…   It feels like there’s nothing we can do.

And then today,  I started watching Equilibrium.

The film follows John Preston (Bale), a warrior-priest and enforcement officer in a future dystopia where both feelings and artistic expression are outlawed and citizens take daily injections of drugs to suppress their emotions.

Based on the concept that emotions are the root of all strife in the world, the logic is that by eliminating these basic emotions, conflict is eliminated.  And the concept seems to have merit, if you don’t consider the immediate execution of any persons committing “sense” offenses, as well as the incineration of any emotionally stimulating material– art, music, and apparently, puppies–  to be “conflict.” 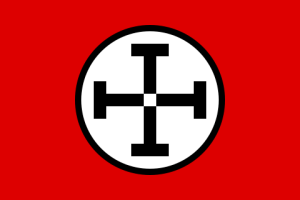 I’m sure this was the director’s intention, but is it any wonder the insignia for the dystopic powers that be looks like a swastika?

But as you may well have guessed, it is a colorless, pointless, and dull existence, devoid of any happiness…or empathy And in the end, isn’t the absence of empathy the root of the problem our world already faces?

The problem with the film…  Sean Bean.  Goddammit! Is there any film in which he doesn’t die ? 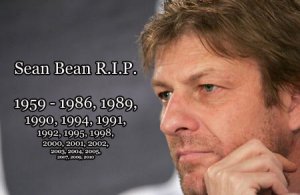 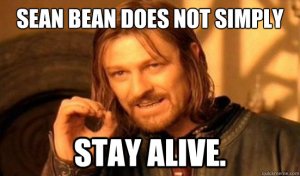 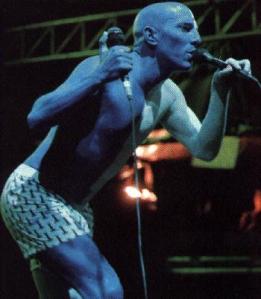