Unless you’re living under a rock (and the way the world is going down the shitter, believe me, I’d understand if you were,) then you’ve probably at least glimpsed the ‘controversial’ Time Magazine cover of the mother breastfeeding her toddler.  The impression I get is that America is pretty much the only place where this seems to really piss some people off.  One reason may be that most of America seems to elevate breasts’ sexual function above their biological one.  In other parts of the world, not only is nursing normal, but so called “attachment parenting” is a way of life.

I nursed my daughter for 20 months (for you mathematically challenged folks, she was almost two) and believe it or not, I heard some pressure to “switch her to formula,” etc, etc.  When I nursed around others, I often covered up as much for their comfort as for my own modesty.  That said, that was a personal choice.  All of those things were personal choices, based on mine and my child’s needs, from the decision to nurse, to when and how to do it, and when to stop.  If you don’t like or agree with someone else’s style of parenting, the cool thing about living in this country is, hey, you don’t have to do it!

I really don’t understand why people in this country feel the need to beat others about the head with their own morals, social mores, and opinions.  I read comments regarding that magazine cover to the effect that the child would later on be scarred and embarrassed when their friends inevitably saw the cover.  Really?  Scarred?  Because I see and even know some people who ignore their kids, emotionally batter them, belittle them, overfeed them, smoke around them in enclosed spaces, get drunk around them, foist them off on others, have ugly fights with their spouses around them, and use them as ammunition in their spousal fights…   If the worst thing that happens to that kid is an embarrassing photo, then he’ll be okay, I think.   I’d worry more about the airbrushed tits and ass the kid has to see on every other magazine cover, billboard, and advertisement every day, all the time.

And for you people that think that the photo or the practice of extended nursing is perverse… grow up.  Get your mind out of the gutter.  Consider therapy even, if ‘boobies’ embarrass you so badly.

I could say a lot of things about this cover, these ideas, but they’d probably all be things you have read before in one form or another.  So I’ll content myself with reiterating a theme you may have noticed courses through a lot of my articles.  People need to mind their own damn business.  Stop trying to make decisions for other people.

Additionally, some brilliant soul came up with this version of the Time cover that really hits me on an emotional level.  ~sniff~ 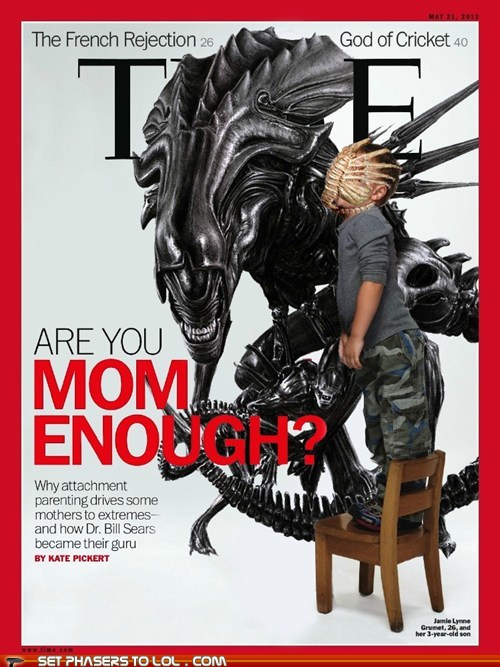