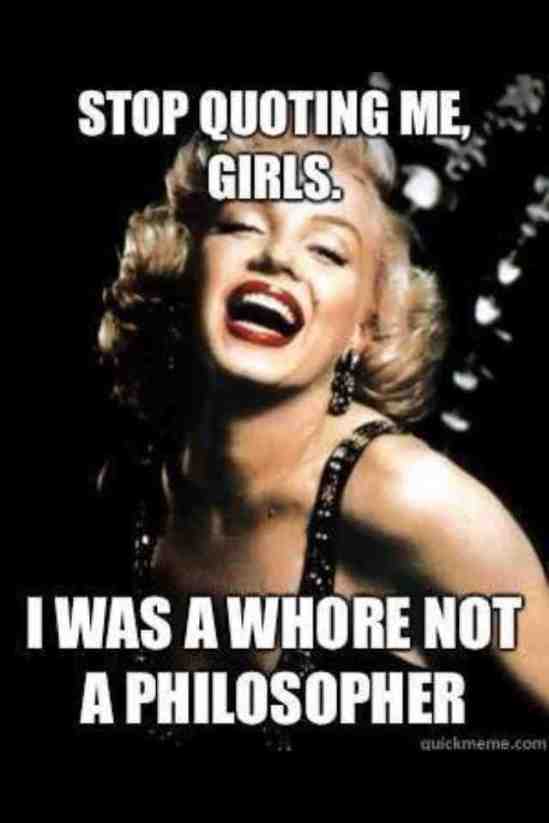 And I’ve thought something along these lines every time I see one of those memes come through my Facebook feed.  Okay, not exactly in those words, really…just that perhaps her quotes aren’t necessarily “words to live by,” when considered within the scope of her many insecurities, mistakes, and less-than-admirable traits.  While I would not call her a whore, it is considered pretty much general knowledge that she carried on affairs with a very married President of the United States (and later after being rejected by him, with his brother.) In fact, it is said she became somewhat obsessed with the Prez, although he seemed to view her as not much more than a very pretty notch on his proverbial bedpost.  But I am referring to more than just her sexual proclivities and questionable relationships.

[By]1956 …she’d begun to lose herself to self-doubt, depression, drugs, and alcohol.

[Her] mother and maternal grandparents had all struggled with mental illness and institutionalization, [and she] began taking sleeping pills for her insomnia. She regularly consulted psychiatrists. She drank heavily, and began a habit of arriving late to work, and sometimes not being able to work at all.

In short, she was kind of a basketcase.  To top it all off (no pun intended,) she ended her career and life early with an intentional overdose of barbiturates.  The image I get of her is a woman who was trying to make her way and own her sexuality in a largely male dominated industry.  However there seemed to be a dichotomy between the part of her that relished her sexuality and the power it gave her, and part of her still felt objectified and dependent on men.

“People had a habit of looking at me as if I were some kind of mirror instead of a person. They didn’t see me, they saw their own lewd thoughts, then they white-masked themselves by calling me the lewd one.”

“Please don’t make me a joke.  End the interview with what I believe. I don’t mind making jokes, but I don’t want to look like one.”

Don’t get me wrong.  I’m not trying to crap on her memory; I rather like her.  I’m not even trying to pass judgment on her chasing a married man, even allegedly pulling that huge mistress party foul and calling his wife.  I’m not passing judgment on her drug use, and definitely not her depression.  I’m not even saying the fact of these things invalidates her ideas…  If anything, it makes her very “human.”  I am just not sure that when people quote her for her empowered and self-actualized feminine ideology, they realize all the ways in which she was not necessarily “role model” material, especially not for young women just coming into their sexuality (not to mention the emotional upheaval of adolescence . )

” I’m very definitely a woman and I enjoy it.”

” If I’d observed all the rules, I’d never have got anywhere.”

” Hollywood is a place where they’ll pay you a thousand dollars for a kiss and fifty cents for your soul.”

Admittedly, many of her quotes do seem empowered and self-actualized.  But the fact of her downward spiral and consequent suicide seems to indicate that all her self-actualization and pragmatic ideas on the ways of the world were not enough to save her from her inner demons.