I feel lighter than I have in…four years. And I’m trying to be ready to just dismiss all the conspiracy theorist, Cult 45 nutbags, and stop allowing them to bait me, to stop trying engage them with logic they clearly don’t care about. Because for the next four years at least, I no longer HAVE to acknowledge them. They can scream their displeasure into the void for all I care. That said…

I keep seeing comments and posts from conservatives, Trumpers specifically, talking about all the awful hateful things they hope for Biden voters now, how they hope we lose our pensions or our homes, or whatever, now that Biden’s in office. These are the same people that expected us to accept Trump as president. They spent four years calling us snowflakes, libtards, and saying fuck our feelings. But as shortly as a few days, ago after the attack at the Capitol, many of them were calling for unity, and yet now I’ve already seen the phrase “not my president” in regards to Biden. The thing about Biden is, you don’t have to like him, but he’s not going to waste 4 years of his presidency trying to only help himself, trying to rile up his base, or pad his pockets and the pockets of his lobbyist friends. Biden’s going to implement programs that are going to benefit the environment, education, international policy, and everybody, Democrat and Republican alike, and try to undo some of the damage Trump has done to our country and its reputation in the world stage. But the fact that there is so many supposedly grown ass self-proclaimed Christian adults walking around telling people that they wish bad things for them is disgusting, and it’s ubiquitous. I’ll admit, I initially felt that way when Trump got elected. I was angry, but NOT because he was a Republican. It was his character, or lack thereof, because I knew what it would mean for the US, specifically minorities, if he got elected. And here four years later we’re ALL reaping what Trump voters sowed.

But honestly, I’m just glad that he’s finally gone, and I want all of us to move forward and benefit from Biden’s tenure. The worst part is no matter what good Biden does in office, these people will never see it, because they’ve never been capable of admitting the damage that Trump did. You know what I wish? Now the only people I wish to suffer for what happened the last four years are Trump and his predatory enablers in Congress. And what I want for them is ACCOUNTABILITY with the law, in full view of the public. I want accountability for the media that fed lies that encouraged and resulted in the capital insurrection. Finally I suggest if you have any friends that are saying hateful things like this that you reevaluate your friendship with them, because clearly they’re bitter and mean spirited. It’s highly probable that after they cool off in a few weeks or months they might go back to being the semi-normal people you thought you knew and they’ll try to downplay their role in this divisiveness. I can’t speak for you but while I won’t say I wish them hardship, I sure as shit am not going to forget how they acted, and what they allowed to happen.

*Edit: I have nothing but respect for people who can grow and learn and realize when they’ve made a mistake. For anybody looking to leave hate and extremism behind, here’s a resource a friend shared with me.

I have a lot to say.  Well, I have a lot on my mind, especially with this latest revelation, bringing us one step closer to imminent Trump-ocalypse; a leaked audio of a deeply disturbing variety.
Just as expected, Trumps supporters are falling all over themselves trying to soft-peddle and down play what essentially amounts to Trump caught on a live mic bragging about using his social position to sexually assault women with ease and impunity. 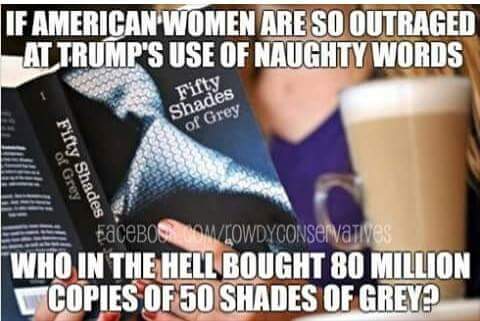 It’s like I said to someone earlier today, I don’t even know how to relate to some of these people anymore.   Like, I am not trying to be a dick, but when, in the face of behavior like this, people are still making excuses, still defending this “candidate,” still insisting Hillary is “just as bad,” I just don’t know how their inner logic works.  So instead of going into all of that, trying to lay out arguments and reason with these people and understand them, I’ll just get straight to the point.
People talk about how “divisive” this election is, how divisive bipartisan politics have become, as if it’s some great conspiracy to “distract us from more important things.“
First of all, it will always BE divisive, so long as you have a group who feel that their “traditional family values” and religion should dictate legislation for EVERYONE. When you attack people on a fundamental level for who they are and threaten their identity and bodily autonomy  by forcing them to live by your “values”, it makes for “divisive” politics.  When you have a group that uses legislation to attack minorities and queer folk, penalize immigrants, citizens, atheists, Muslims, control  woman’s bodies in regards to reproductive decisions (or any decision), you are creating a very antagonistic and divisive situation.  You are attacking people’s fundamental state of being.
Now, you have a Trump, a man who has taken all of these divisive sentiments and magnified them. He disdains blacks, he disdains Mexicans, he disdains immigrants, he disdains (and abuses) women. And he’s making campaign promised based on these divisive ideas.  He is unashamed to say it! He is actually galvanizing all of the hateful people in this country, making them less afraid to be loud, self-righteous bigots .

What defense will the rest of us have from discrimination and injustice and hate if the person in our nation’s highest office can say these things with impunity?

So, yeah, this election is “divisive.”  It’s divisive as shit, and the more people who try to close their eyes and ears to the hate being heaped on the rest of us, the more divisive it’s gonna be.

I originally posted this on Facebook, but then remembered by “no more politics on my Facebook” vow, and decided to post it here.  Because I am really, super fucking tired of reading about and hearing people bash Obama for the Affordable Care Act, and even more tired of seeing people make carte blanche statements about people they’ve never even met based on who they voted (or didn’t vote) into office.  Some people are just random morons spouting their uneducated/ biased opinions in Huffington Post comment sections would likely not be so free with their opinions if they were face to face with the people they were insulting; after all… most civilized people regard it as gauche to just straight up insult someone because you don’t agree with their politics.   But apparently, it’s okay to do that online.  As evidenced by all the hateful political memes going around Facebook.  When I was growing up, who one was voting for was often considered a private matter, much like asking someone about their salary.  But now apparently it’s okay to criticize people in retrospect for their choices in the polls. 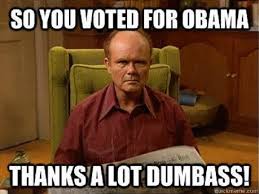 Oh, this is funny? You probably just insulted and alienated half of your Facebook “friends.” But I bet you’re really a nice person in real life, aren’t you?  For realz.

You don’t have to agree with the President, or even like him, but I can’t help but feel like a lot of the negativity surrounding the ACA is born of ignorance and bigotry.  After all, socialized medicine is not a new idea, and Obama is not the first President to try to implement it.  Historically speaking, the Social Security and Medicare programs were also met with some resistance.

” Harry Truman took on the idea of national medical care and tried to integrate it into his Fair Deal program. Truman’s attempts were also unsuccessful, though during his presidency the fight for national medical care became specific to the aged population.Once the targeted age was decided, a lengthy debate began over presenting a coherent medical care bill to Congress. During the Eisenhower administration, the House Ways and Means Committee was created. The members of this committee were mainly Republicans and Southern Democrats, complicating attempts to pass social health programs. Wilbur Mills, chair of the committee, later played a role in creating the health care program that was integrated into the Social Security Act.” (source)

Obama’s ideas may not be perfect, but I do think they could work better if all parties cooperated instead of some businesses and politicians just trying to keep their already fat pockets padded.  Obama didn’t single-handedly ruin this country, as so many claim… lobbyists and politicians did.  As much as some people feel like he is not doing this country any favors, he’s not Adolf Hitler either.  He’s not the anti-christ… (and btw, your tin foil hat is crooked.)

But the main thrust of this post is actually this;  for those of you who feel comfortable judging a whole group of people as “morons” (or any other unflattering but essentially meaningless defamation) simply because you dislike that they voted for Obama (or didn’t, as the case may be,) just remember, these people are people too.  They have ideas, dreams, people they love, and people who love them.  And some of them are probably people you know, people you call “friends” and even like.

Or maybe they are people you will need some day.  If you should one day find yourself caught in a burning building, are you going to turn away a fireman who comes to your rescue because he’s a “moron who voted for Obama?”  (Psst…if you are that much of a self-righteous dick, you should probably consider just dying.  Just sayin’.)

I absolutely LOVE this article. Not only does it put a spotlight on intolerance and ignorance, it reminds us as individuals and as a society what real hate is. I don’t often reblog other people’s articles. If I have something to say, I say it myself. But this particular article not only highlights an important idea that many “God-fearing Americans” seem to have forgotten, but also indirectly underlines a theme you may have noticed runs through a lot of my social commentary pieces…and that is this: you don’t have to like or agree with what I do or how I live my life, but stop trying to tell me how to run my life and stop trying to force your way of life on me. Basically put, you leave me alone, and I’ll leave you alone.

Or, How I Learned To Stop Thinking And Talk Louder

Nothing feels so good as being on the right side of an issue. You’re for gay marriage, and you want the whole world to know (in fact, that’s largely the point). That’s cool, friend, you know which way the wind is blowing, and you don’t want to be caught on the wrong side of popular opinion. We understand. We don’t respect it, but we definitely understand.

The problem is how you go about it. You’re trying so hard to show the world that you value freedom and individual liberty and that you despise the tyranny of conformity. Unfortunately, by aping Soviet-era denunciations or McCarthy-esque accusations, you’re really just demonstrating an embarrassing inability to grasp concepts more challenging than a sound bite.

Please stop using the word hate to describe people who don’t agree with you. We’ll talk about what hate…