At least once a week now, I ask myself the same question, usually prompted by some ignorant, separatist redneck post or some anti-abortion self-righteous meme…posted by my “friends.”  Some of these are people I haven’t actually “seen” since high school, and even then, they were more like acquaintances.  Many are people to whom I used to be closer, and time and/or distance has come between us, but with whom I would like to keep in some sort of contact.  And then I’m realizing I just never knew some of these people to begin with.  And I actually like some of these people…I mean, except for the unfortunate fact of their intolerance… 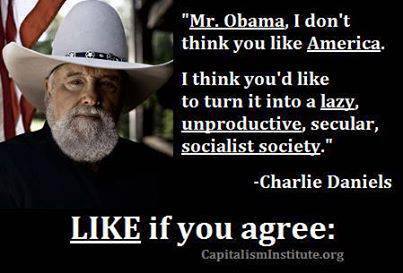 Shall I attempt to point out the many ways this meme is ridiculous?  Firstly, the only people who have a problem with secularism are people who feel everyone should be their religion.  Secondly, pretty sure many of the “lazy, unproductive” people were that way before Obama got into office.  I can only assume this is a jab at people who are on some type of public assistance.  (These are also likely the same people who post memes like “before we help the poor in other countries, we need to help our own” and then go around bitching when any laws that actually attempt to do so get proposed.)

Thirdly–  Ow! I stubbed my fuckin’ toe!  Thanks, Obama!

But anyway, the question I have been asking myself is this:

At which point do I draw the line between respecting my friends’ views and differences of opinions to “You’re just an asshole and I don’t think I wanna be your friend?”

Generally I would say, the difference would be whether or not their “views” encourage hate or discrimination of any kind.  But seriously…have you seen  some of the memes going around now?  The line between expressing opinion and attempting to insult/control the opposition seems to be becoming increasingly blurred.

And especially in lieu of the George Zimmerman verdict and all the “moral outrage” and barely concealed racism going around, I am SO sick of seeing hateful, ignorant posts about “reverse racism” and white victims of black killers.  How about we direct some of that moral outrage and righteous indignation towards the things that really matter, and maybe realize that all these posts are just widening the racial divide?

But, back to my original question, how do you personally decide when to accept differences, and who to cut loose because they are just too different (aka, an asshole)?  Frankly, I’m all “assholed” out.

“Your assumptions are your windows on the world. Scrub them off every once in a while, or the light won’t come in.”
― Isaac Asimov