So, if you’ve been on social media at all today you may have seen the various stories about James Franco allegedly attempting to “hook up” with a seventeen year old young woman via Instagram. In case you missed it, here’s a highlight:

Girl goes to show.  Girl meets Franco and takes Instagram with him.  Girl “tags” Franco in photo.  Franco tries to score with girl. 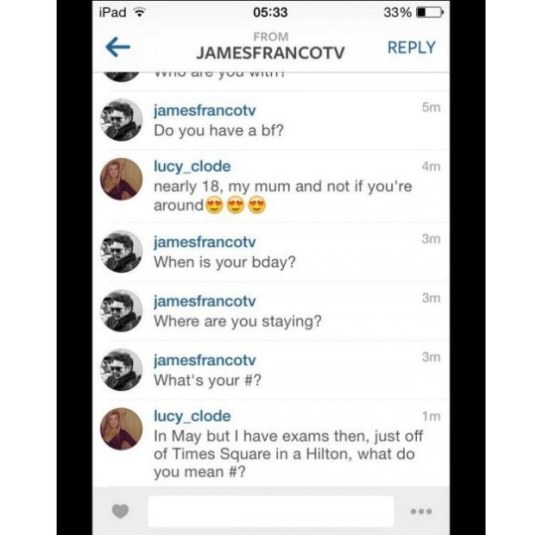 I mean, in my opinion, he seems to come across as a petulant teen boy with blue balls at one point, (after the girl once again asks for proof of identity) saying “I gave it to you.  If you don’t wanna meet, then text me when you do.”  As in…call me when you’re ready to put out? And then, in a “surprise twist” (haha,) girl is too smart to fall for it and tricks Franco into proving his identity with photos. And despite the fact that Franco is obviously looking for a booty call and not much more  and was trying to sign off when she wasn’t interested, despite the fact that she is barely this side of legal (apparently 17 is legal in NY?) some people on social media and news comment sections are feeling bad for Franco, and blaming the girl, like she somehow “entrapped” him. Even if it’s legal and she is beyond the “age of reason” and legally able to make a yes or no decision on whether or not she wants to be another notch on Franco’s bedpost, she tried to catch him in his bullshit, and some people are pissed at her for it.  What does that say about how far our society has or hasn’t come in regards to gender differences and sexuality?

Oh, okay, so he admits to being caught being a creeper.  Does this “confession” change the fact that he was trolling for young poontang?