Just a few random thoughts that have been poking at my consciousness like splinters, presented in a passive-aggressive way for your entertainment…

All of your “selfies” look exactly the same.  Stop it.

Maybe it’s not your opinion that people object to; maybe it’s the combative and assholish way you present it that pisses them off.

That pic of you fresh from the gym/car dealership/proctologist/whatever– you know, the one where you’re staring into space, or looking sideways and making duck lips at the camera…it was very unique and illuminating.

You’re so vain…you probably think this post is about you.

Dear close friend or family member, I have to be more understanding and try not to get my feelings hurt when I know you’ve been online, but you’ve ignored something I posted specifically for you; you must just have your hands full “sharing” all those played out memes and “inspirational” photos.

I love watching grown ass adults act like adolescents on a social media site, don’t you?

And speaking of “grown adults,” watching some of the older crowd navigate Facebook is like watching two monkeys try to fuck a football.

I’m just here for the Scrabble.

She must have been beautiful…  At the beginning of the first episode of the French cop drama, Engrenages (it means gears or cogs, but the title is translated to Spiral for US viewing,) a nude young woman is found in a dumpster, her face savagely beaten and mutilated.   Within the first few minutes of the show, when told by one of the investigators that the victim’s face was smashed, the Prosecutor replies, “She must have been beautiful.”

The first time I read this (the show is subtitled,) it gave me pause.  What?  Was something lost in translation, or was this ham-fisted remark somehow considered a normal observation in the context of a foreign investigation?

A few mere minutes later he offers, “She was killed because she was beautiful.  Hence the ferocity.”

I thought…Oooo-kaaay.  That makes a little more sense.  Maybe this is a serial killer and the Prosecutor is familiar with his MO.

But this turns out not to be the case either… and yet people throughout the show continue to remark on the victim’s beauty.  One cop goes to his prostitute informant (who he apparently also likely beds and occasionally scores coke from) to see if she has heard anything that might help identify the victim.

Prostitute: Are you sure she was a prostitute?

Prostitute:*laughs* You’re right.  If she wasn’t in the game it’s odd.  Especially the mutilation stuff.

So now it has been inferred not only that her beauty somehow precipitated her murder, but that being the victim of a horrific mutilation makes much more sense if you happen to be a working girl.  Having studied violent crime, I will allow that being a prostitute is considered to be a high risk factor in terms of one’s chances of becoming the victim of a violent crime.  There is a real correlation there.

However, in the general public’s view, (and regrettably, sometimes in law enforcement) there is also an implied and sometimes spoken assertion that a sex worker killed because of or during the course of her work somehow deserves her fate.  The fact that the prostitute/informant in this particular show would consider the mutilation of the victim “odd” if she wasn’t a sex worker seems downright inappropriate.  Again, is it simply that something has been lost in the translation from the original French dialogue?  Or maybe it is a calculated tactic by the script writers to infer how many women in “the game” feel, how they view their own self-worth?  Or maybe it’s exactly what it sounds like; an ignorant and flawed assumption that may be indicative a a larger problem, the way people view female victims of violent crimes?

I seem to remember the coroner in the autopsy scene similarly remarking on the savagery of the victim’s injuries and also linking it to her beauty.  He claims the attack to her face was postmortem and methodical.  He also posits that it was done not to hinder identification of the victim (as her hands and fingertips were left undamaged,) but rather out of some sort of spite for alleged beauty.

Again with the beauty?

And then again, almost exactly halfway through this first episode, the coke snorting cop tells his colleagues that the neighbor claimed a certain person of interest was a “real beauty”, and that he would “let them know” when he saw her.

What?!  Why does this keep coming up?  I’d understand if they had some specific reason to believe in this situation that the victim’s beauty was an emotional catalyst for suspect, IF they had any information that backed up that theory– previous crimes possibly committed by the same offender, evidence collected from crimes scenes, a criminal profile… A person can be driven to fatal violence by many things.  Their victim may be the actual focus of their rage or they may be no more than a convenient surrogate, chosen for reasons that have nothing to do with aesthetics.  Furthermore, the mutilation of the face, especially done postmortem, could also be indicative of the perpetrator’s desire to “erase” the victim’s identity, not from a literal standpoint, but from an emotional perspective.  A person’s face, specifically their eyes, are often considered to be symbolic of their essence, representative of what makes them a real person in the eyes of the perpetrator.

Alas, the episode ends on a sort of cliff hanger, with the crime not yet solved.  I guess I’ll have to watch a few more episodes to determine whether the attitudes expressed towards the female victim in this episode are indicative of the overall flavor of the show.  I hope not. I found the frequent references to the victim’s appearance distracting and irrelevant.  Not to mention completely inappropriate.  Unless it turns out to be relevant to this particular plot line, I think I’d find those sort of repeated remarks too irritatingly misogynistic to continue to watch the show. 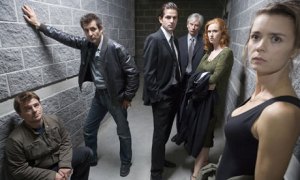