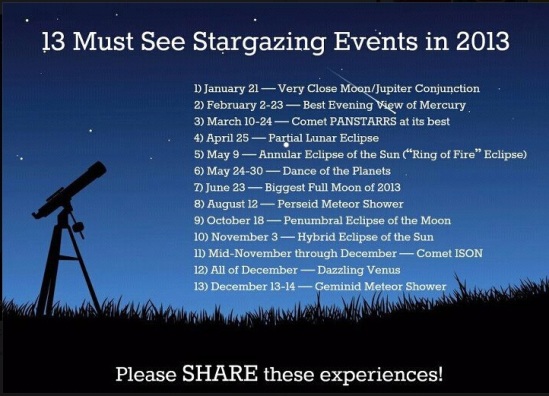 You may have seen this picture going around Facebook or some other social media site, the one of the “must see” astronomical events of 2013.  It just so happens, gentle readers, that this year my birthday falls on the date of the annular solar eclipse (at least according to this particular chart–  NASA has the date listed as May 10.)

You’ve probably heard of solar eclipses, although maybe you’ve never been lucky enough to see one first-hand.  They are predictable events, but do not occur at exactly regular intervals.  Wikipedia defines an solar eclipse occurring when the Moon passes between the Sun and Earth, and the Moon fully or partially blocks the Sun.  This can happen only when the Sun and the Moon are in conjunction as seen from Earth in an alignment referred to as syzygy.

In short, eclipses occur when the Moon’s orbit crosses the Earth’s orbital path.

However, the Moon’s orbit is not perfectly circular.  It’s elliptical (think of an oval.)  A total eclipse occurs when the Moon is on the shorter side of it’s orbit, and so it’s apparent size relative to the sun is large enough to completely occult the sun.  Conversely, when the Moon is on the longer side of it’s elliptical orbit, it appears smaller from Earth, and only partially occults the Sun, leaving a bright and visible ring of Sun around the outer edges.  This is an annular eclipse, also known as the “ring of fire” (calm down ladies, this is a different ring of fire.) 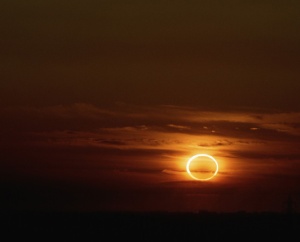 It should be noted that the ability to view an eclipse depends on your position on Earth at the time of the eclipse.  The path of totality, the path the Moon’s shadow traces upon the Earth, is not very wide.  The predicted path of totality, that relatively small part of the Earth where one will be able to witness this amazing event, is a 106 to 139 mile -wide track that traverses Australia, eastern Papua New Guinea, the Solomon Islands, and the Gilbert Islands.

So… it really doesn’t matter if it happens on my birthday or the day after; I won’t be seeing it from here!