I love to sing.  I have a special relationship with my music and love to sing along with my favorite songs…and even some not-so-favorite songs.  If I know the words, any song may be fair game.  It’s almost a compulsive thing; when in the car, I often feel compelled to sing along with the radio– not necessarily every song, but, you know, enough to annoy anyone who may not enjoy my singing.  For my part, I have sung in a couple of bands and while I’m no Grace Slick or Amy Lee, I’ve been told I can carry a tune, so hubby tells me it’s not too awfully painful when I sing along.  My kid seems to like it when I sing her favorite songs, if that “mom’s gone batshit” look she gives me is any indication.  For a while, hubby and I would always sing along with that 5 Hour Energy commercial on Hulu.  You know, the one with the guy recording…

It got to the point where when that commercial came on and that part came up, my daughter would look at us in anticipation of our goofiness.

I generally don’t sing in the shower; in fact, I rarely sing in the absence of accompanying music unless a song is really stuck in my head.  But I’ve been known to sing ~gulp~ Karaoke.

And I sometimes sing while I exercise…which is no mean feat if you’re working at all hard.   So I got curious…   Are there any health benefits to singing while you exercise?  I mean, obviously, your timing has to be pretty good to run (or other cardio), breath, and sing at the same time, right.  Like walking and chewing gum?  Okay, maybe not like that.  According to Livestrong.com:

During 20 minutes of singing, a person who weighs 150 lbs. burns about 34 calories if sitting down, or 45 calories if singing while standing up, according to CaloriesPerHour.com.

However, while singing alone will not burn beaucoup calories, it is beneficial to your health in other ways.

As you may have found out for yourself, if you’re a fellow beltway belter or karaoke night killer, singing can help to relieve stress, improve your mood, and lower your heart rate and blood pressure.  Singing also gives your lungs and diaphragm a workout because it involves respiratory muscle exertion and deep and open breathing. (source)

According to an ezine article by Judy Rodman, physical exercise is vital to vocal stamina, and conversely, people who sing correctly will notice they become physically tired, because singing correctly uses the big muscles of your core and minimizes incorrect over-use of the little muscles of your throat.However, according to Enliven Magazine, singing while you workout you may be hurting your weight loss efforts.  According to this article, if you can belt it out while you’re exercising, you may not be working out hard enough (reaching your target heart rate.)  I have heard it similarly said that if you can talk while you workout, you’re not doing it right.  FOr me personally, I don’t sing continuously while I exercise, rather I belt out a few favorite lines sporadically, and usually not during my high intensity intervals. What do you think, gentle readers?And, no…that’s not me.

Fuck the Shred; I’ve got a new exercise plan!

It’s not like I’m the first person to have this idea.  We like sex, we like losing weight…why can’t we do BOTH?  And the more creative and acrobatic, the more calories burned. 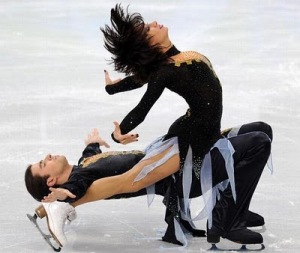 So what are the best calorie burning SEXercises???

Wait til I tell DH.  I can see it now…   “Wanna help me work off that chocolate torte? It’ll only take about two and a half hours…”

Okay, last thing’s first.   I’m starting to think I must have a tapeworm or overactive thyroid or something.  In fact, I am almost hoping I do.  What started out as sporadic and mostly an annoyance and hindrance to my weight loss efforts even with the added bump in exercise,  has become out of control.  I am hungry almost all the time.   END_OF_DOCUMENT_TOKEN_TO_BE_REPLACED