Hubby have I have great discussions, which just proves our chemistry is still there.  Yet another discussion about the direction of the Resident Evil game franchise… sexy, right? We’re both pretty much in agreement that although the newer, more action oriented gaming style of RE4, 5, and 6 is pretty cool, with the over-the-shoulder first person shooter point of view bringing you closer to the action, we both miss the atmosphere of the first few games in the series.  Especially if you played the remastered Game Cube version with the added content, you’d likely agree none of the subsequent games in the series can match the mystery and creepiness of feeling completely alone and small in that vast mansion.  As hubby and I discussed (again) the points in which the “new” games differ from the older ones in the series, that led to a discussion about the creatures of Resident Evil, and how the newer RE games seemed to rely more on the “gross-out factor,” rather than actual scariness.

This segued into which creatures in the franchise had the “oh, shit” factor–that being, no matter what weapon you have in your hand, the presense of these particular creatures have the power to make you (or your character, rather) run the other way, keening

under your breath the whole way.  Hubby finds my reaction to these characters a ceaseless source of amusement.  He makes fun of me, and I laugh.  That’s the kind of relationship we have.

Here are a couple of my favorite/most hated Resident Evil baddies.

Admittedly, as the games keep getting revamped and the graphics keep getting better, the newer incarnations of the Resident Evil zombie dogs (“Ganado” dogs, or “Majini” dogs, or “J’avo” dogs) should be scarier than the originals… but they’re not.   The best I can figure is that it’s the selection of weapons and ammo you have access to…or rather, the lack thereof.  In the newer first person RE (4,5, & 6) games, you have access to weapons that are varied and up-gradable.  Rifles, Magnums, high-powered pistols, grenade launchers, laser rifles, mine dart throwers…  But in the original RE game, until you accidentally stumbled on the locations where the grenade launcher or magnum were stashed, all you had was a pistol and a shotgun. They had a limited range of motion, due in part to third person perspective, and, unless you were particularly judicious in your use of it, very little ammo.

When you heard the tell-tale clicking of little doggy feet, (or worse, they jumped through the window and surprised your ass, usually in a pack) you knew there was a good chance you were gonna die.  You could try to stand and fight, or you could haul ass in the other direction.  Personally, unless I had a grenade launcher or a shit-load of shotgun ammo, I hauled ass.  Cuz those little fuckers are hard to hit, and it seems to take a whole bunch of pistol shots to put one of those dogs down! 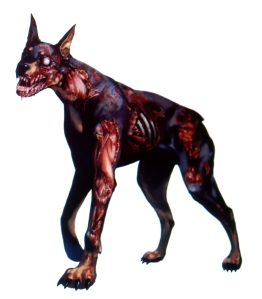 Does somebody want a Scooby Snack? 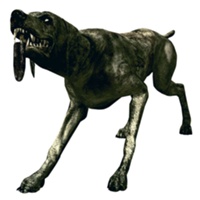 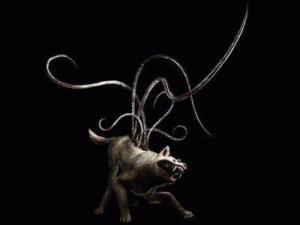 There are several incarnations of  this particular adversary, and they appear in both RE 4 and RE5. There is the ganado man with the burlap sack over his face, and there are a few spots in the game where you encounter one or more of what I refer to colloquially as “chainsaw bitches.”  The latter are women with bandaged faces and homicidal tendencies.  Both are aggressive, quick, and both mean instant death if they get close enough to decapitate you.  When I hear the tell-tale sound of the chainsaw or the shriek of those harpy bitches, I run the other way… at least far enough so I safely can plug them with my Magnum and thus keep my head attached to my neck. 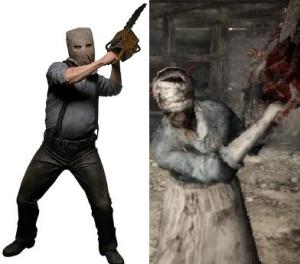 A chainsaw and a bad attitude… 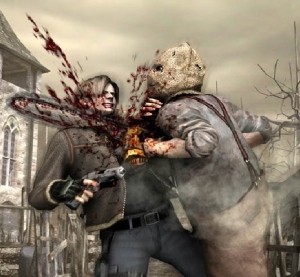 The first time I was decapitated, I was in shock for a few minutes afterwards. It’s not the kind of thing you forget.

A sub-species of the Regenerator from RE 4, the Iron Maiden is creepy as shit.  The tell-tale sound of its approach is a sort of mouth-breathing version of lamaze.  It sounds funny, but this dude is a creep.  He’s covered in spikes and if you give him half a chance, he’ll project his spikes out like some sort of deformed humanoid porcupine, and try to impale you on them.

Part of the problem with a Regenerator is that it’s a pain in the ass to kill.  As you may have intuited, if you shoot one, especially in the limbs, it generally recovers fairly quickly.   The trick to putting down a Regenerator is to kill the multiple parasites living within it’s body.  For this you need a special infrared rifle scope that allows you to see the Plagas hidden in the creature’s body.  It follows that you need the time and distance to use said rifle, and since there are usually four to five Plagas in a given Regenerator, when I hear them coming, I back the hell up! 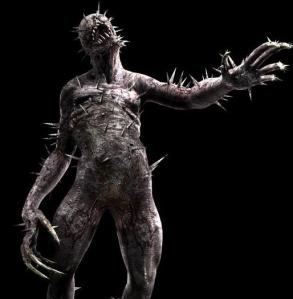 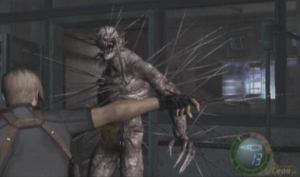 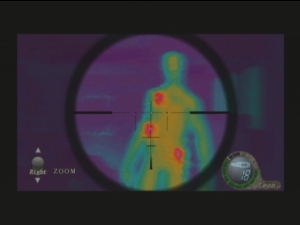 “I got your hug right here, bitch!”

Well, there are several more scary and anxiety provoking enemies in the RE franchise, but these are the main ones that come to mind when I think of the “oh shit” factor.  My policy with these guys is usually run first, then shoot!

What are your favorite RE characters to hate?