So, I’ve been giving this some thought really probably ever since I had my child, but more so now that she is growing up and coming to an age where she’ll be able to anticipate the holidays and internalize some of the associated traditions and ideas.  As my regular readers know, I have what some might call a “crisis of faith.”  My heart wants to believe in a loving God, but my intellect and reason just don’t accept it.  And contrary to what some may say, wishing doesn’t make it so.

I am acutely aware of how my adult perception of Christmas and its origin has changed in relation to the hopeful magic of childhood Christmases past.   I was never what I would call “strong” in faith, but now that I have decided where I come down on the organized religion issue, I am unsure how exactly I want to represent Christmas to my child.  It’s certain that I do want to celebrate with my family in some way.  To me, right now, Christmas is mostly about family, togetherness, and love…  But why should we celebrate that in December instead of all year round.  I am fine with objectively explaining to my daughter, when she is old enough to understand (she is turning three next month) the reasons why the majority of people who celebrate Christmas do so (“Jesus is the reason for the Season” and all that jazz) but I do not feel inclined to raise her in a religion or even in a belief in a supreme being.  A large part of me feels that indoctrination of young children is wrong because it sets them at a disadvantage for later autonomous decisions regarding religion.   For example, had I not been taught as a child that I was supposed to believe in God, would I be so uncomfortable with the fact that I don’t believe?

Then there is the “Santa question.”   We believed in Santa as a kid, and it was fun and relatively harmless, even when we found out he wasn’t “real.”  And yet,  I find I am loath to lie to my kid, even if it is a fun and harmless lie like Santa.  And yet regardless of what I tell her, I wonder how many of my friends and relatives and even random but well-meaning strangers  will thoughtlessly ask her if she’s “excited for Santa” this holiday season…

So I am left with the question of how I want to present the winter holidays to my child.  The only reason Christmas is even celebrated in December is because of Christianity’s attempts to combat or counterbalance the pagan holidays and rituals of excess practiced during that same season. (source 1, 2)  Basically, Jesus was not born on December 25th, and there is no date given in the bible for his birth, although certain astrological references lead some scientists to believe he was actually born in the Summertime.

Do I take a more naturalistic or pagan approach, celebrating the time of year and nature’s cycles, and then maybe meld into it my feelings of family and tradition?  Would it make some people feel better if we celebrated the holiday but didn’t call it “Christmas?”  Guess it’s a good thing it’s only the end of July… then again, wasn’t Jesus born in the Summer? 😉

This is the optimal idea… 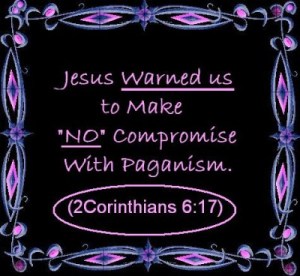 …and yet clearly that somehow pisses some people off.

(Click here for more on why Christmas may be celebrated on the 25th of December.)