As hubby and I work our way towards the end of yet another much loved television series (at least, the most current season that is available,) I have that familiar feeling, a sort of sadness and disappointment that’s a little like grief.

I know, it sounds silly.  But after a whirlwind journey through the extremely entertaining British comedy-drama, Misfits, I have been mulling over the effect our entertainment can have on us.  If you’ve ever read a really engaging book, (or even better, a series like The Dark Tower novels or Harry Potter), you are likely aware of how you can become transported to another world, and how you can become attached to and love the characters with whom you’ve spent so much time.  I think our television can have a similar effect on us as a good novel. 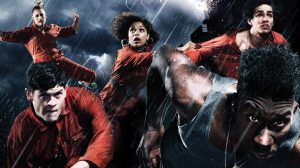 So, as we began season (series) 4 of Being Human, amidst some seemingly very rapid (and unceremonious) cast changes, I mentioned to my husband the fact that how we view our favorite television programs can actually affect the way they affect us.

When you watch a particular show on a service like Netflix or Hulu, you can become immersed very quickly.  There is an instant gratification sort of effect.  You don’t have to wait a week for the next episode.  There’s not anxious anticipation, rather a desire to bull through and watch as much as you can (if you’re really into the show.)  If you’re like hubs and I, you’ll watch three or four episodes a night.  You reach the end of a season or series fairly quickly. Consequently, twists in the plot, changes to the cast, and deaths of main characters often seem very abrupt and are a bit of a shock to the system.

Conversely, if you watch a series as it airs on television, obviously it’s going to feel like you spent even longer with the characters…however, if you’re like me, and you get behind on a series, or even just waiting until next week’s episode, sometimes the sense of urgency you feel to see the next episode kinda of gets muted with time. (I went through this when we went without cable for a while; at first I thought I’d just about die if I didn’t see the next episode of True Blood, but after a while I was just like, Meh.)

Still, I think I prefer to be able to watch a series consecutively (thank you, Hulu!)  In addition to having my instant gratification, I never have to wonder “what’s on TV tonight?”  There are less commercials, you can pause for snack or a bathroom break, and rewind when your kid’s screaming (or you have to yell at them for pulling the cat’s tail) and you’ve missed a bit.

What is your favorite way to watch your favorite shows?  Do you think the way you view your programs effects how they impact you?