Before this goes any further, let me qualify that question.

–I’m not talking about religion or conversations in the booth with your priest.

–And I’m not only talking about your soul.

Guilt has been a part of my life almost as long as I can remember.  Even before my OCD was diagnosed, and long after, part of my ritual to expel guilt was that I needed a confessor. My mom usually fulfilled this role, even though most often the guilt du jour had nothing to do with her.  Often my confessions were embarrassing and tedious, to both me and my chosen confessor, and were more often then not unnecessary, as my guilt was more a product of my OCD than anything I had actually done wrong.  Though my OCD is now better controlled, there are still times of high stress where I feel a formless guilt and a compulsion to “confess” something to the most important people in my life.

However, the majority of people experience guilt normally, in response to appropriate things, and in varying degrees.  What they do in response to that guilt is as individual a thing as the guilt itself.  Especially when the guilt involves a close romantic partner or spouse.  Relationships are complicated and successful relationships and lasting romantic connection take work.  When asked, most people would likely agree (at least out loud) that honesty is the best policy, although some of those people would likely also tell you there is such a thing as too much honesty.  I’m guessing there are many people, men and women, that would admit having told a “white lie” now and then, to spare their partner’s feelings.

Do you think I’ve gained weight?

Does my hair look thinner to you?

What do you think of my mother?

Sure, honey, dinner was good.

While I do agree with the use of tact and sensitivity, I am personally not a fan of the “white lie.”  I don’t lie to my husband, even about little things.  You may not believe me, and that’s okay, but I think I already demonstrated that I have a pretty overactive conscience with regards to some people.  That’s just me.  I don’t know if it’s the norm or not, or how many people do tell white lies to their spouse with little ill-effect on their conscience, and I am making no judgments.

What I am curious about are the big things?  Lies about our past…hiding money…cheating…

Any secrets or lies that would seriously damage a relationship, or at the very least, hurt you or your spouse emotionally if they ever came out.

There seem to be two main school of thought regarding secrets, lies, and whether or not to confess.  Some people feel that confessing, telling the truth, clearing the air, is the only right thing to do.  If you love someone, you don’t hide things from them or lie to them.  Period.

Then there is the school of thought that confession is actually a selfish act, done more to assuage the guilt of the “confessee” than out of any desire or need to right a wrong.  That there is no point in hurting the wronged party more by confessing, when nothing can actually be gained from truth coming out.  For example, you cheated on your spouse.  It was a mistake, a one time thing, you feel horrible, and you know it will never happen again.  What will confessing do but hurt your spouse, your relationship?

(We won’t go into the school of thought that is “deny, deny, deny,” even when confronted with evidence.  I think people that do that are operating with a questionable moral compass to begin with.  That’s all about self preservation, and guilt doesn’t much factor into it.)

Personally, I always advocate honesty, but if there was going to be criteria on “when to tell the truth,” I’d say the deciding factor should be the answer to one question.

Would the relationship change significantly, would feelings or actions of either party be different if the were the truth known?

After all, how can a relationship be secure, be real, if both parties are not operating with all the facts ? Would your girlfriend leave you if she knew you cheated?  Would your husband forgive you if he knew you went off the pill even after he said he wanted no more children?

Anyway, I am curious to know what you guys think.  Consider this sort of an informal reader poll…

To tell or not to tell…

Talk to the Queen. 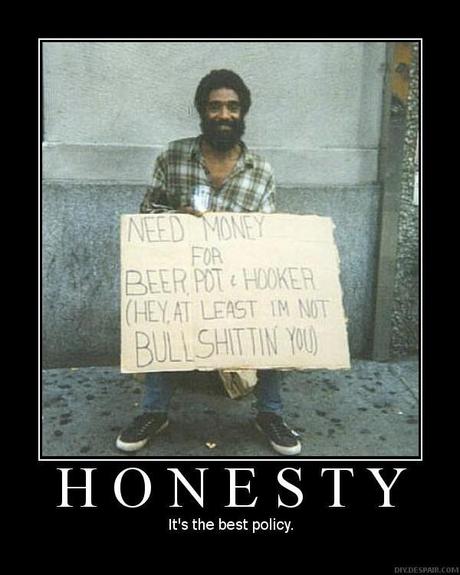 A lot of people like to think they know other people, that they’re adept at detecting deception and above being fooled.  I always cringe when people recite that drivel about how people’s eyes move “up and to the right” for the truth and “down and to the left” for a lie, or whatever they say it is.  I remember very clearly when I was in college, one of my psychology professors telling the class that this was patently false.  Directionality of gaze was not so much the issue; rather a person averting their gaze in general, or being unable to look someone else in the eyes, could signify deception.

Then again, it could signify a lot of things; distraction, feelings of inadequacy or shyness, feelings of guilt (unrelated to lying.)  Plus, anyone who’s ever been done dirty by a spouse or best friend could probably tell you it’s completely possible for a person to look you square in the eyes and lie to your face.

Of course, I’m digressing, as usual.  The point is, a lot of the so-called clues to detecting when someone is lying to you, seem, in my opinion, vague and unable to be extrapolated to the majority of people with enough accuracy to be conclusive.  That may read like a mouthful, but all I really mean is that these “tells” don’t occur with enough consistency or reliability to be useful in most situations.  There are too many variables, and unless you are the type of person who likes to take chances with your relationships, you don’t want to accuse someone you care about of lying unless you’re damn sure.

Perfect example;  I’ve seen it mentioned before that people who qualify their statements with remarks like “To tell you the truth,” “Frankly,” and “To be honest,” are actually unconsciously cuing you to the fact that they are about to lie to you.

Am I the only person, then, that regularly uses those expressions…and then proceeds to do exactly that– tell the truth?  I can’t speak for everyone, but when I use that phrase, it usually means that what I’m about to tell you will either seem A) surprising/unexpected coming from me, or B) that what I am about to say is going to be the truth, but perhaps an unpleasant truth.

Anyway, I’m definitely not disputing that there are often physiological and physical signs present when a person is lying.  However, I think these signs need to be taken in context.  The fact that lie detector tests are not considered reliable or accurate enough to be used in court should be at least some indication that many of these signs of deception are not consistent enough between subjects to be 100% reliable.  I would guess that some indicators are also more accurate than others.  For instance, involuntary reactions like pupil dilation and micro-expressions would likely be a more reliable indicator of deception than a turn of phrase, such as “To tell the truth,” the use of which is subjective depending on the speaker.  (For instance, perhaps that phrase was used frequently throughout the speaker’s childhood by his mother, and thus is a learned mannerism and has no bearing on deception.)

I’m sure there are people out there like Dr. Cal Lightman in Lie to Me* (I think they’re called poker players), and I have great admiration for people with that skill set.  But I doubt there are many of us regular Joes that can do what Cal does.  I’d wager that individually, how effective each of us is as a human lie detector will depend, in one part, on how much we know our subject, and in another part, how observant and aware we are of other people in general. 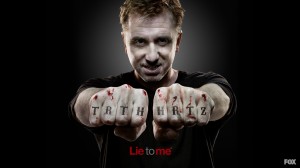 Tangential to that topic, I’ve heard it said that people who preface their opinions with “No offense intended,” “No disrespect,” or some similar sentiment, are in fact, about to insult you.

This is another blanket statement with which I disagree.  It may be true that a lot of people use this phrase as a passive aggressive way to take a jab at someone, but–and again, I’ll only speak for myself here– when I say “No disrespect,” it is often when I know my opinion is directly contradictory to the other persons’s, or when there seems to be no way to stand behind my point without seeming combative.  It’s been my experience that some people become almost automatically defensive and even hostile when confronted with an opinion that is very different from their own.  Some people take it as a personal affront.  If you don’t believe me, scroll through your Facebook wall.  I’m sure you’ll eventually find at least one ridiculously hostile argument over politics, religion, sports, or something even less significant.

Anyway, as usual, I’ve sort of taken a short post and gotten way too analytical about it.  Thanks for bearing with me and my rambling.

And if  you don’t like it, No disrespect, But to be Honest...fuck you.  (Just kidding…sort of.)