Bad photo but you get the idea. 🙂

I’m feeling a little grouchy today.  Yes, more than usual.  The day is only half way over but my bullshit-o-meter is full up of toddler attitude and Facebook know-it-alls.  I think I need a nap.  But since that’s not an option at the moment, I’ll drink some old coffee, vape off my e-cig, and try to write something half-way humorous to pull me outta this little funk.

Thus, I give you…  some modern solutions (that are likely safer/more PC) to some old school problems.  No, I’m not talking about boring shit, like my e-cig.  I’m talking about real issues, here.

Like werewolves, for instance. People have been dealing with werewolf infestations since before you could say “hypertrichosis.”  Traditionally, the solutions have been a little dangerous…and messy.  Wolfsbane?  Come on, wolves are carnivores!  Piercing the hands of the werewolf with nails?  How...Judeo-Christian.  There are apparently other less violent, lesser known ways of dealing with lycanthropes as well, such as one German method whereby a werewolf is cured by speaking it’s Christian name to it three times.  Well, that’s just a little bit religion-biased, I think.  Not to mention, I’m guessing it’s not so effective, or we might have heard about it more often.  My guess is the first few dudes to yell any name at a werewolf became Scooby snacks in pretty short order.  And as  to silver bullets, who’s rich enough to just have loads of silver lying around???

A much more humane and modern solution the problem would be the use of shock collars– nice, non-lethal, non-biased, non-costly werewolf control.  Simply snap the collar on the alleged shape-shifter while he’s in his human form (this part is very important!), and keep the control with you at all times.

Where else can we apply some more modern solutions to the problems that plagued our ancestors?  I’m glad you asked.  How about poltergeists?

Poltergeists  have traditionally been described as troublesome spirits who, unlike ghosts, haunt a particular person instead of a specific location. (wikipedia)

One theory behind poltergeist disturbances is that they are actually manifestations of emotional distress brought on by an (unwitting) human, most often a child or teenager, and often a female.  In the 1982 film Poltergeist, it is suggested that more than one spirit is responsible for the “haunting” of the Freelings’ home, and that there is one demon in particular who has targeted young Carol Ann in an attempt to gain control over the multitude.

I maintain that in either case, the solution is simple.  Give that little bitch some Lithium!  (I’m sorry, she’s the victim here, too, isn’t she?)  Well, either way, she’ll be too busy twitching in the corner to cause much trouble– the demon can’t use her for anything, and her emotions will be so blunted that any poltergeist “disturbances” will be a thing of the past (along with fine motor control…) 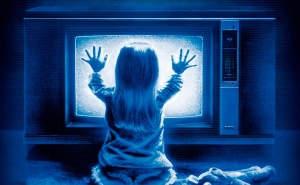 The solution is actually so much simpler.  These kids are really nothing more than out-of-control, attention-seeking brats.  And what do we do with out-of-control, attention-seeking brats in America?  Why, we reward them with their own reality TV show or spot on a talk show!  They want attention; let’s give it to them!  They can duke it out with one another on Jerry Springer, or go to “demon” rehab at the Sober House!

And if that doesn’t work , you can always try the Lithium or the shock collar. 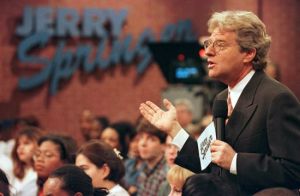 Today on Jerry Springer, kids who are inhabited by the devil!

I go to the doctor’s for a physical.  Dr. Carr has been my physician for a while, but he doesn’t really know me, because, like most guys I know, I avoid the doctor unless I am practically dying.  So at first, he looks at my chart with a mixture of mild disapproval and curiosity. END_OF_DOCUMENT_TOKEN_TO_BE_REPLACED