If I posted a status on Facebook claiming that there were 52 states in the US or that 2+2=7, people would in all likelihood not only correct me, but also lambaste the shit out of me for being so ignorant.

And yet, it’s considered passe, annoying, and even rude to correct improper grammar.  People like * me are often referred to as “grammar nazis,” as if preferring people use correct English, which we were supposed to have learned in school, is something about which to be embarrassed.

Aside from wanting to grind my teeth into dust when I see people who should know better mix up “your” and “you’re,”  the educational and social double standard that this is somehow acceptable annoys the piss out of me.  These same people who complain about grammar nazis are likely also complaining about the “state of education” in the country.  I’m just sayin’…

It’s not like these rules are arbitrary.  To me, the fact that “you” and “are” can combine to make “you’re” and that word’s meaning is completely different from “your” does not seem to be an impossible or nonsensical concept.  I’m really not even trying to rag on people who make this mistake (I even do it sometimes if my brain is moving faster than my fingers can type.)  It just annoys me that there seems to be some sort of double standard where, once out of high school, English is regarded as Math/Geography/[fill in blank with subject]’s bastard red-headed stepchild.  I’m not even talking about people needing to know every obscure rule of grammar there is;  I’m talking very basic grammar here. 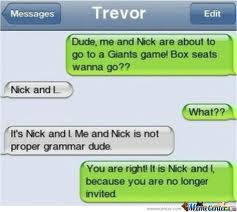 Well, I know all this bitching won’t do anything to change anything.  We grammar nazis are routinely ignored.  But I figured that at the very least, I could get a blog post out of it, and we could all enjoy some grammar memes.   Oh noes.  I’m a… “grammar nerd!”

I was actually THINKING this last night….

No one is feeling MY nuts!

You all just better watch your step! Liam is serious.

*Thanks to Louise for pointing out even Grammar Nazis make mistakes. 😀