(orig. 2015)  I had a conversation with the dog today.  We were talking about the new pope.  For the first time ever, I am actually not only more aware of the Pope’s activities than I have ever been, but I am also finding I actually kinda like this Pope.  I tried to explain this to the dog, but it turns out, he’s not a very adept conversationalist. 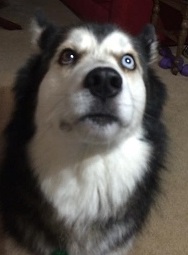 It’s not a food.  It’s like that wonky little number symbol that’s on a telephone…

Nevermind.  Forget it.  The point is, this new pope, he’s actually pretty cool.  I’m not even religious and I like him.

Why? Does he taste good?

No, man.  He’s the head of the Roman Catholic Church.  He’s a big deal to Christians everywhere.  He has, like, supreme and universal power over the whole Church.  People all over the world look to him for spiritual guidance…   In Christian theology, he’s the traditional successor to Saint Peter, to whom Jesus gave the keys of Heaven.

He’s like, um… the main guy…   Like, he would give you all the treats and walkies and belly scratchin’s you could want, if you only follow the rules.

I’m not religious.  I’m an atheist, you know?  But even though I’m not religious, a lot of people in the world are Christians.  And with this new pope, for the first time in a long time, I feel like the Church may make some important social steps forward.   You see, buddy, there are a lot of different people in this country and not all of them are very nice.

No walkies.  No belly scratchins.  No head pettin’s or treats or cookies or cakes or marriage licenses…  Because they follow these rules written in this very old book, and they want everyone else to follow them too, whether we believe in the book or not.

No, man! Look, just forget it.  We’re getting off track here.  I’m trying to tell you why I like this guy.  I like this pope because when the mean people look to him and ask him if it’s okay to be mean to someone who doesn’t believe in their rules and their faith, he tells them “no.”  He is taking the Church away from the strict and unbending view it’s historically held on some subjects. He is telling people, mean people and all people, to take a step away from all the judgement and punishment that is really not theirs to dole out in the first place, and he’s trying to balance the rules of the Church with the love and mercy that Jesus intended.

…Well, that sounds nice, I guess…

For instance, take this whole Kim Davis thing…  She’s one of those big, ol’ meanies who not only wants to force everyone to follow her rules, she doesn’t even follow them all the time.  She doesn’t think people different than her deserve to be happy.

Nope, not good.  Worse than no walkies.  Kim Davis is like…like… the nurse at the vet’s office that tries to stick a thermometer in your butt.

Man, that IS bad.

Not THAT kind of bitch, buddy.  Besides, you’re neutered

…but if you want, you can pee on her.